We use cookies to enhance your experience. By continuing to vist this site you agree to our use of cookies.

Home / Articles / Things will only get worse: Post-Brexit reality is hitting farmers hard

Bad news can hit you with a bang or it can creep up on you. The changes at Britain’s borders had an immediate impact, but for many farmers in England the consequences of losing income from the EU Basic Payment Scheme (BPS) are only now sinking in. For farmers in Scotland, Wales and Northern Ireland payments will remain the same – at least for now. In July, Farmers Weekly (30th July, 2021, p.30) published a farmer survey which found that 95% of farmers received annual basic payment. A little over half get up to £30,000, and for larger farms the sums are considerably higher as the payment depends on the acres farmed.

Now that Britain has left the EU, payments for English farmers will be phased out gradually with the last one to be made in 2027. Instead, they can apply for money through the Sustainable Farming Incentive scheme (SFI), one of three programmes under the Government’s Environmental Land Management scheme (ELMs).

If that sounds complicated that’s because it is. ‘Public money for public goods’ is Defra’s catchy slogan, but at present it is still unclear how much money farmers will eventually be paid and for what – the four-year trial phase of the scheme only began this summer, the general SFI rollout is planned for the middle of next year.

So far, only one thing is absolutely clear: ELMs will not be a full substitute for the EU Basic Payment Scheme. At best, farmers will be able to make up about a third of BPS through ELMs.

The Farmers Weekly poll reflects what that means: three-quarters of farmers have no idea how their business will survive without BPS. ‘Some 53% said it would be difficult to replace the lost income, with a further 26% unsure if they could.’

So, what can farmers do to make up for the loss? Tim May runs an organic farm just a few miles northwest of Basingstoke. ‘I am driving a business, not just a tractor,’ he tells me, and he certainly is not relying on subsidies. May took over the management of the 2,500-acre Kingsclere Estate in 2014. Maximising profits through minimising risks and sharing resources has been to May, a mantra from the start. He is in partnership with two young farmer-entrepreneurs: Ben Reynolds is a carpenter by training and keeps 600 hens in four mobile units on May’s land; and Oliver Chedgey owns 480 New Zealand Frisian Jersey crossbreed dairy cows and a 20 a side mobile milking parlour. Tim May provides the grazing land and, as with Reynolds, the profits are split according to the partnership agreement. May also converted several old farm buildings into 100,000 square feet of commercial space, which now houses 50 different businesses, and the waiting list of companies wanting to rent is growing. The 35 existing farm cottages have been refurbished for residential accommodation.

George Young farms in Essex, just outside of Basildon. He returned to the family farm in 2013 after studying mathematics and working as a commodity trader in London for a few years. Young says he wanted the farm to be viable without subsidies even before the Brexit referendum: ‘You can’t rely on subsidies’. For him, converting the farm to organic is the best way to hedge his bets: ‘When you grow conventionally, your cash flow depends solely on the harvest, just four weeks out of the year. The rest of the time you have to invest. And even the harvest can’t be sold immediately, first you have to reinvest by planting the next crop. That is ludicrous!’ He started the conversion to organic in autumn of 2020 with the goal to bring as much diversity to the farm as possible: he will eventually grow organic heritage grains and pulses in a seven-year rotation. Each cycle will begin with two years of soil building and herbal lays which are grazed by a herd of Red Poll cattle. Young has planted 7,000 trees, spaced so that the alleys in between are wide enough for planting and harvesting field crops. The tree belts will connect to field margins and create a continuous habitat belt for wildlife and beneficial insects throughout the farm. Young has just invested in a stone mill from Vermont, and the milling room with a cleaning and packing unit is nearly ready. Organic locally adapted heritage grains processed on farm are truly a niche product. He hopes to achieve a very good price by selling to artisan bakeries – of which there are many in and around London. In future, the proximity to discerning eaters in London could also merit a market garden and maybe even employing a butcher who can slaughter on site – but those projects are still some years away. 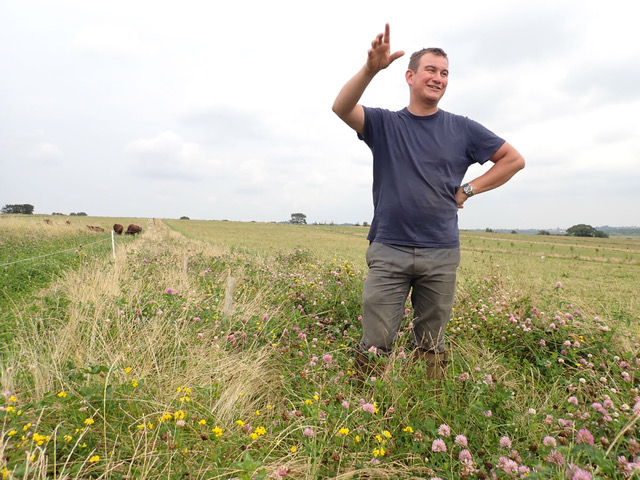 For Young, as well as May and his farming partners, selling locally is an option – because the potential customer base in the Southeast is huge. And as managers of family-owned farms, they are able to implement the changes they see fit – from going organic to refurbishing buildings or creating commercial space to rent out. It’s a degree of freedom that will help them to create new business opportunities and make up for the loss of the Basic Payment. Other farmers are in a less fortunate position.

The Taylors are third generation tenant farmers near Banbury in Oxfordshire. I met Andrew Taylor, his wife Margaret and son James when I visited the farm in April to help with lambing for a few days. Apart from the flock of around 520 sheep, there are 50 to 80 beef cattle. Some 200 free range hens produce eggs. Every Thursday, Andrew Taylor does two egg rounds to supply long-standing customers in nearby villages. The rest is sold at the farm gate with an honesty box or supplied to a local farm shop. The Taylors grow wheat and barley – a third to a half of it is needed as feed on the farm, and the rest is sold. James is an ardent beekeeper, so there is honey for sale, and at the beginning of this year they sold meat directly in 10 kilo beef boxes for the first time. Andrew’s wife Margaret runs the farm B&B and looks after the vegetable garden. The family raises poultry for Christmas and grows their own potatoes. Before the pandemic they had 25 school visits a year and, as part of the care farming initiative, they ran a ‘Farm Club’ one afternoon a week. Planning the visits and making it fun for everyone is time consuming, but the Taylors have a deep sense of community and everything they do is rooted in it.

For the Taylors, the Basic Payment makes up the difference between the farm scraping by and making a profit. What changes can they make to compensate for the loss of the BPS? It’s a topic we discuss one afternoon in the utility room of the farmhouse with Andrew sorting eggs for the evening delivery and James lying on the floor because he’s done his back out lifting bee hives.

The Taylors already participate in environmental stewardship schemes, for them the Sustainable Farming Initiative would replace existing schemes, not add new options. 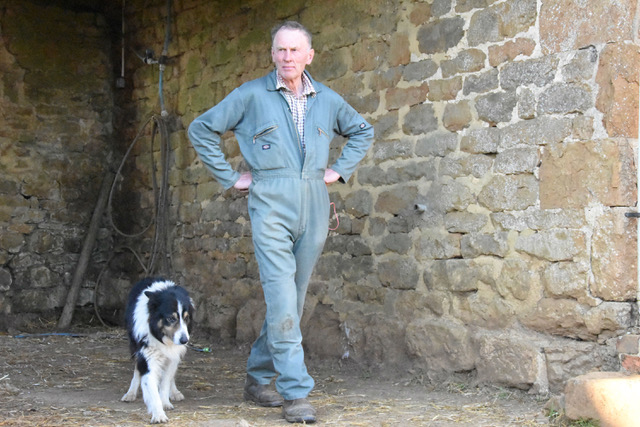 Farmer Andrew Taylor with one of his sheepdogs

The farm business is as diverse as it can be. Every new venture would require the permission of the landlord, money and additional labour. That rules out a lot of options such as a bigger barn for more cattle or managing the sheep more efficiently, a new building to extend the B&B or the acquisition of shepherd’s huts, for example. James thinks the number of sheep could be increased, and they could be lambed outside, though that is difficult with footpaths running through the patchwork of pastures, and potentially, losses would be higher in bad weather. Increasing the beef cattle herd does not make sense because they would not have sufficient land for grazing and feed production. The start of the meat box scheme has been promising but getting serious about direct marketing means investing in and managing a website, packaging and distribution – for which the Taylors have neither the time nor the money.

What about going organic? No longer using pesticides and chemical fertilisers would reduce costs and organic meat could be sold at a premium. Not really an option though, says James, as the farm income would likely go down during the three-year conversion period – would that leave them enough income to pay the rent? In theory, Andrew could give up farming and James could find work elsewhere. But ending the tenancy would mean losing the farmhouse. Where would the Taylors live? The three of us have gone quiet, at a loss to see what the way forward might be.

The loss of the Basic Payment will hit many farm families even harder than the Taylors. What about hill farms with no arable land? Remote farms with little chance to diversify into tourism or direct market meat? Or farms on which direct payments from the EU accounted for 80-95% of the farm income?

ELMs cannot fix the system, only a systemic change could. The Sustainable Food Trust has introduced the concept of True Cost Accounting, which is a method of assessing the true costs and benefits of different food production systems – for the environment, for the profitability of farms, for food, for our health. True Cost Accounting would show the true worth of small and medium sized diverse family farms, which, at present, have little chance to compete with subsidised industrial agriculture. But as long as such change is not on the cards, stark warnings by economists, that a third of all farms may go out of business because of Brexit, may well turn out to be true.

Stay up to date with the latest SFT views and news

Other articles by this author

Small abattoirs in Germany: You get what you pay for

NatWest Group and SFT to collaborate on The Global Farm Metric

A shift of 10% of the retail market share for sustainable, local food businesses could create an additional 200,000 jobs, support a green economic recovery and restore nature, a new report published this week by RSPB and Sustain has found

NatWest Group and SFT to collaborate on The Global Farm Metric

Why we should be concerned about a free-trade deal with Australia?

Sign up to our weekly news digest for the latest articles, news and campaigns delivered directly to your inbox