Bringing biodiversity back into farming

Earlier this year, the UN announced that 1 million species around the planet are at risk of extinction, with agriculture the primary culprit in what is being hailed as the sixth mass extinction, the first global extinction event to be caused by humans. With 72% of Britain comprised of farmland, what farmers do on their land has never been more critical. Without a radical change in practices, we may lose the vital ecosystems upon which we rely for our survival.

The recently published State of Nature report says that in the UK, “Agriculture has been identified as the most important driver of biodiversity change over the past 45 years, with most effects being negative.” The push to increase productivity and profit in farming has had a catastrophic impact on wildlife. According to the report, there has been a whopping 41% decrease since 1970 in the abundance of wildlife in the UK, with the Farmland Bird Indicator plummeting by 54% over the same period. As the report points out, it is not the productivity that has caused the problem, but the intensive farming practices that generate that productivity.

The report suggests that at the heart of this lies a shift from traditional mixed farming to a specialisation in either arable or livestock, at the same time as an increase in farm size. With fewer crop species being planted and the loss of nature-friendly features such as meadows, ponds and hedgerows, wildlife habitats have been directly impacted. Without crop rotations that are associated with mixed farming, farmers rely on nitrogen fertiliser, creating ‘green deserts’ of flowerless monocrop pastures and waterways polluted by agricultural run-off. Monocultures, now synonymous with modern farming, are more susceptible to disease and pests and require chemical inputs to protect them – so much so that pesticide applications have doubled in the last 25 years. Among these pesticides are the now restricted neonicotinoids. One study has linked the chemical to a 75% decline in insects in German nature reserves, and it is now widely accepted to have caused a decline in vital pollinators that are essential for three quarters of crops in the UK. In addition, a change in cropping patterns and an increase in stocking rates have all taken their toll.

What is clear is that we need to urgently change our farming practices to start living within planetary boundaries and halt the biodiversity crisis, at the same time as producing enough food to sustain a growing population. The question is, how do we do this?

Currently there is no law that binds farmers to maintaining biodiversity on their farms, although approved pesticide use is monitored and fertilisers and farm waste are limited to protect water quality and prevent pollution. In addition, to receive the basic area payments, farmers must comply with minimum ‘greening’ measures. Despite this, many farmers are choosing to do more, either voluntarily or through agri-environment schemes. These schemes reward improvements, such as planting hedgerows and field margins, as well as specific environmental outcomes such as a rise in indicator species. Whilst there is no doubt that these schemes are a step in the right direction, there is little evidence so far as to how effective the schemes really are. By separating conservation and food production, pockets of wildlife can develop whilst the rest of the land often continues to be farmed intensively. If we are to truly reverse this tragic loss of wildlife, what happens across the whole farm needs to be considered, not just what happens around the edges.

There are, of course, many farmers who are already working to restore wildlife. Through careful, joined up land management, that is working with rather than against nature, some farmers are increasing on-farm biodiversity at the same time as producing environmentally friendly food. Henry Edmunds, who owns the Cholderton Estate on the Hampshire-Wiltshire border, is one such example. A keen conservationist, he has long recognised the negative impacts of chemical inputs on farms. Their destruction of native plants, he believes, “obliterates the very foundation of the food chain and is therefore directly responsible for the crash in insect and bird populations which we are experiencing nationally today”.

The farm, which has been organic for 30 years, has an exceptional wealth of biodiversity and is almost carbon neutral. This is the result of a traditional mixed and closed loop farming system with 300 dairy cows and their young stock, and 350 ewes. The thin, chalky soils in the area are low in fertility and highly vulnerable to erosion and eel worm infestation. Henry believes the best way to look after the land, preserving the soil and its fertility, is to incorporate grazing animals and leguminous crops. Not only does this improve the wildlife but it mitigates against climate change by sequestering carbon in the soil.

This type of farming system is also called a rotational ley system, where herbal leys (grasses, herbs and legumes) are grown for silage, hay and forage for livestock, in rotation with arable crops. Fertility is generated from the decomposition of animal manures and the use of herbal leys which include deep rooting legumes that fix nitrogen in the soil naturally, without the need for synthetic fertilisers. Once the herbal leys have tired, they are ploughed in and arable crops for animal feed are planted without artificial fertilisers or chemicals.

Crucially for the biodiversity, Henry is restoring a hilly area on the estate that has particularly thin soils, with support from the Countryside Stewardship Scheme. The area, once used for sheep grazing, was then ploughed up during the Second World War. It has now been returned to historic chalk downland, which supports grazing animals and all manner of nationally important flora and fauna. Some 70 species of plants inhabit the land and butterflies including Marsh Fritillary, Burgundy Fritillary and Adonis Blue have returned to the area where they haven’t been seen for seventy years. Elsewhere on the farm the Brown Hairstreak Butterflies are also supported, one of only two habitats in Hampshire, and 450 types of moth have been recorded, including the rare Scarce Forester. Populations of farmland birds are also present such as the Skylark, Corn Bunting and Henry’s favourite, Lapwings. “I’ve worked very hard at the Lapwings,” he says. “Nothing gives me more pleasure than Lapwings when they fledge. The juvenile does this crazy flying to show how good they are, that they can roll and twist and fly. It’s fantastic to watch them go.” 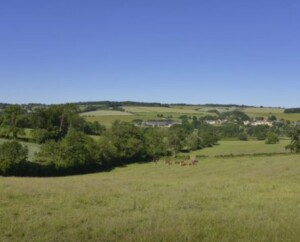 Another farm that practices nature-friendly farming is Fir Farm in the Cotswolds. The farm is a mixed livestock farm with both permanent pasture and meadows, as well as woodland, orchards, rivers and ponds. Like Cholderton, the farm operates a closed loop system and recognises the critical importance of healthy soils, which provide a home for 25% of the planet’s biodiversity and, in the UK, stores 9.5 billion metric tonnes of carbon – three times as much as the atmosphere. Fir Farm uses forage legumes to fix nitrogen and deep rooted, multi-species leys to improve soil structure, retain moisture and build soil carbon. Manure is also put back on the land to further improve the soil.

Key to this is the practice of mob grazing which is as close to the natural behaviour of grazing animals as you can get on a farm. The animals graze and are moved as a group every few days with far reaching benefits for both the animals themselves as well as the wider environment. The longer periods between grazing allows the grassland to grow taller, with stronger, deeper roots and greater plant diversity, attracting more wildlife. Soil is trampled naturally by ruminants, breaking it up to allow moisture and seeds in. Broken plant stems decompose to form organic matter whilst the manure from the cows is more evenly spread as they move across the field.

Ten years ago, Fir Farm was a conventional dairy farm and it only converted to organic last year. Despite this, there is already an abundance of biodiversity including the rare broad-fruited Cornsalad (Valerianella rimosa) which can be found in less than 20 places in the UK, and the threatened Scandix pecten-veneris, a type of Shepherds’ Needle. There has also been an increase in both hedgehogs and barn owls on the farm which is at odds with the decline in numbers nationally.

Although the benefits are clear, there is still a very low uptake nationally of these farming practices which, in part, are a consequence of a lack in financial incentives. “The returns are not good,” says Henry. “I’m now getting paid 5p less for my milk than I was last year. The squeeze is on and it’s not right because we’re doing the right thing, but we’re not being looked after properly by the dairy industry. Where’s it going wrong?” he asks. “Farming needs extra support. We have to do something radical.” While schemes such as Countryside Stewardship have provided some assistance to farmers restoring parts of their farm, the State of Nature report clearly shows they have not gone anywhere near far enough to address the systemic problems in agriculture that are causing biodiversity loss.

The reality is that it’s still more economically viable to farm in an unsustainable way that will continue to drive wildlife numbers on farms downward. Given that biodiversity loss currently accounts for £7.8 billion of the hidden costs in our food system, it makes economic, as well as environmental sense, to change this. As we look towards a UK outside the EU, there is a concern that pesticides and environmental laws could be relaxed. To prevent this happening, it is imperative that any future Government should avoid a ‘piecemeal approach’ to agricultural policy which would prevent a mainstream shift to more sustainable farming practices. A whole farm approach that integrates nature conservation with food production is urgently needed. Farmers should be incentivised to farm in harmony with nature, not against it, protecting our ecosystems for future generations.