Throw in summers with prolonged periods of increasing heat, with rainfall that dwindles year after year or comes un-seasonally and in damaging downpours. Or springs with such high winds that flowers are blasted from the trees – leaving little fruit or nut harvest later that year.

For many Palestinian farmers, the above scenario is their reality.

The damaging effects of climate change on farmers and growers the world over, are experienced in common. But access to the resources needed to mitigate that damage is unequal – defined by poverty and also by politics. 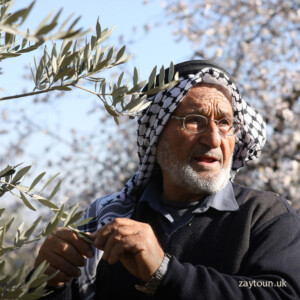 In Palestine, the policies of the Israeli occupation mean that farmers like Haj Rafeeq Hussein are more vulnerable to climate stress because, in many places, the occupation restricts or forbids access to their lands and water sources.

In the summer of 2020, Palestine experienced a prolonged period of extreme heat, with no rainfall. Haj Rafeeq grows 900 rainfed olive and almond trees on 75 dunums (18.5 acres) of land in the north of the West Bank and he needed to irrigate his trees in order to ensure his harvest survived. Over 60% of Palestine’s West Bank is in Area C which is under full Israeli administrative control, including Haj Rafeeq’s land. This means he is unable to either build water cisterns to capture spring rainfall or to dig new wells or boreholes. He has to resort to buying water from his local council, which in turn has to buy water from the Israeli water company Mekorot.

According to a recent OCHA report, 2020 saw a big increase in Israeli demolitions of Palestinian structures. Agricultural structures constituted 29% of total demolitions recorded in this year, at a time of climate stress when farming infrastructure is crucial. The heat wave of 2020 was not exceptional. The International Journal of Climatology sets out a challenging scenario for farmers in the Eastern Mediterranean region. Longer summers and shorter winters will mean that dryland farming becomes less sustainable. According to James Salinger, lead author on a UN report on climate change, Israel and Palestine will experience summer heatwave temperatures of 46°C by 2050 and up to 50°C by 2100.

Palestinian human rights group Al Haq described the water sector in Palestine and Israel as characterised by Israeli overexploitation of shared water resources, an exhaustion of long-term storage and deterioration of water quality. Israeli settlers in the West Bank consume approximately six times the amount of water used by the Palestinian population living in the same territory.

In this context, the farming of rainfed crops like Haj Rafeeq’s trees is both the continuation of traditional regional agriculture and also a modern survival strategy. Just 5.5% of land in Palestine’s West Bank is under irrigation, so rainfed crops predominate, but in a future of sustained extreme heat and drought, access to traditional and new water resources leaves Palestinian farmers literally high and dry. 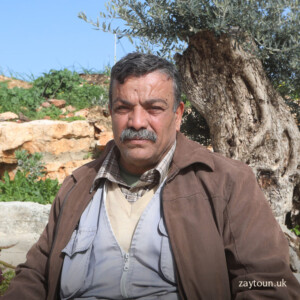 Palestinian farmers in the Palestine Fair Trade Association (PFTA) have been returning to traditional regenerative agriculture practices, in part to minimise harvest losses from climate stress. Intercropping and mulching around trees with manure is proving successful, and cooperatives within the PFTA are sharing experiences and knowledge in an attempt to adapt to changing seasonal patterns. Farmer Awad Melhim from Anin cooperative explained how he uses manure to support the productivity of his olive trees:

‘We have noticed that the amount of rainfall quantities is decreasing and along with it the tree productivity is decreasing. There are changes in the seasons of flowering and fruiting, and this impacts on our lives. We improve the soil with natural manure. This is the basis to enrich the soil and feed the trees. I used to see my father and grandfather deliver the manure to the land using donkeys. They would put it around the trees and build some stones around it to keep the manure there, so I do as they did to take care of the trees.’

Yet Awad and farmers like him have lost lands to the Israeli Separation Wall and the growing settlements. Awad has not received permits to access around 20 dunums (5 acres) of his ancestral lands since 2008, which are now behind the wall, diminishing his ability to remain resilient by growing on different areas of land. Even when they do receive permits for land access, those permits are often for just two weeks at harvest time, barring access at other times of the year to tend to crops that are heat-stressed or threatened by pests.

In response to the challenges they face, Palestinian farmers have organised in networks such as the PFTA, to share resources, experience and knowledge and to engage with the international community, including with British customers who buy their products and can amplify their calls for justice and sovereignty over water and land resources. Palestinian activists have also established initiatives such as heirloom seed libraries that preserve Palestinian agricultural heritage and biodiversity, and agroecology and community-supported agriculture, in order to promote food sovereignty while minimising the environmental effects of farming.

For Palestinian farmers, climate change resilience is inevitably bound up with social and political justice. In that sense, their livelihood is both an act of resistance and an affirmation of their indigenous knowledge of farming their lands and harnessing their natural resources in a sustainable way. As farmers experience the increasing unpredictability of harvests in an occupied and climate-stressed land, both the support of international landworkers’ networks and the constancy of solidarity trade grows more important.

Cathi Pawson Cathi is a co-founder of Zaytoun, the social enterprise which pioneered sales of Palestinian produce in the UK.