COP27: Making progress, but we must move faster

Executive Director Adele Jones comments on her time at COP27, highlighting that positive commitments are being made, but the proof will be in what happens next.

Patrick and I had a good, but busy seven days in Sharm El-Sheikh last week. Whilst many will agree that on big climate policy, this COP is likely to be something of a placeholder, on food and farming, I genuinely think the progress is encouraging. For the first time, it was included as a theme on the COP programme as ‘Adaptation and Agriculture Day’. Although this allocation perhaps highlights that governments have not yet realised the full potential of farming to become a major part of the climate solution – not just a sector that must ‘adapt’ to a changing climate – thinking back to where we were after Glasgow 12 months ago, it’s moved quite a way up the agenda. 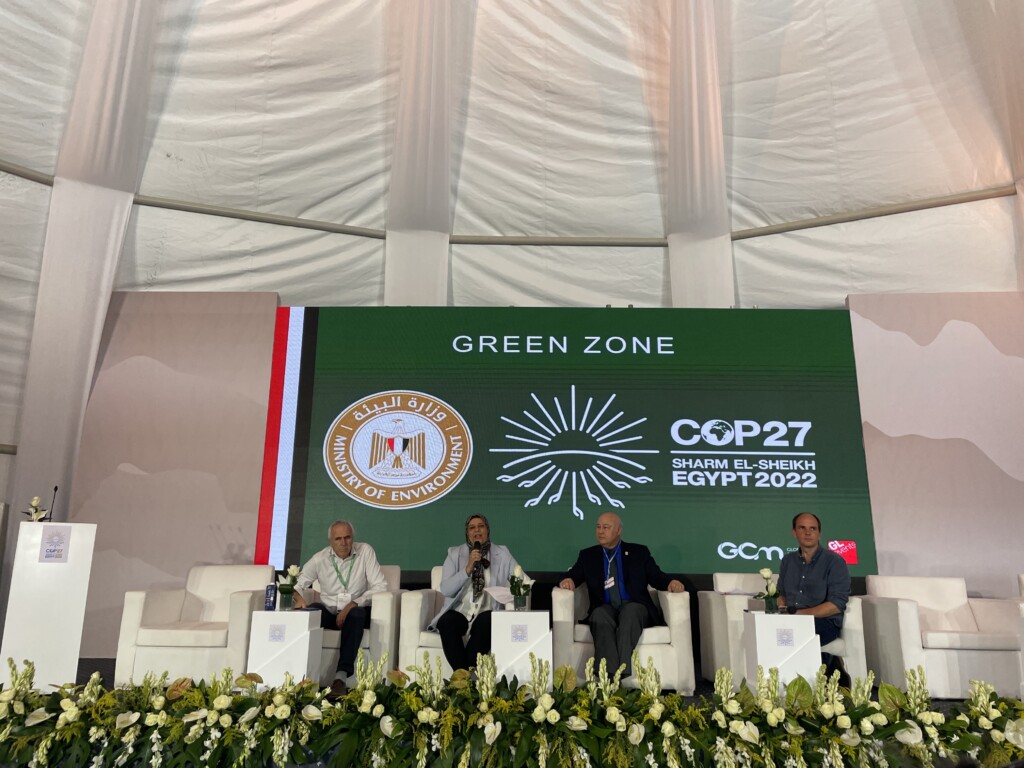 Patrick takes part in a discussion in the Green Zone

This year, we spent much of the week at private sector and media-led events, including the Sustainable Markets Initiative’s ‘Terra Carta Action Forum’, Bloomberg Green, the New York Times ‘Climate Forward’ conference and Goals House agenda.

The Sustainable Markets Initiative (SMI) event, in particular, felt significant. Despite His Majesty the King not being able to be in Egypt in person, the level of attendance and the energy generated was quite extraordinary, with many CEOs of the world’s major companies. Over this last week, we have supported the launch of the SMI Agribusiness Taskforce report on scaling regenerative agriculture. The ‘Big 5’ recommendations were:

To quote Grant Reid, the CEO of Mars, “We must make regenerative agriculture a no brainer business case for all farmers.” Building this financial case will, as the recommendations suggest, need to include a mixture of new revenue streams for farms. Food companies must start sourcing from farmers using regenerative techniques and practices and pay a premium for these products; governments should pay for the delivery of public goods; banks should provide preferential lending rates to farmers delivering positive, measurable, impacts; and farmers should be able to access new markets by selling carbon, nature or even culture credits.

I have to admit to having been somewhat sceptical of the emerging voluntary carbon markets for farmers, and whilst I remain cautious, I feel a little more optimistic about the opportunity than I did a week ago.

The great work of SEKEM

During our time in Egypt, we were generously hosted by SEKEM – an inspiring organisation led by Helmy Abouleish that has pioneered the development of organic and biodynamic agriculture in Egypt. Since the 1970s, SEKEM have effectively ‘re-greened’ the desert using innovative farming methods and composting techniques. They now work with farmers across Egypt to produce high quality, nutritious food and clothing and they even run schools and a University of Sustainable Development to encourage young people to build a career around sustainablity.

This week SEKEM launched a pioneering soil carbon credit scheme under their ‘Economy of Love’ initiative. By measuring their emissions and soil carbon sequestration potential, they found that their farming systems were not just net zero, but actually net climate negative, and felt strongly that their producers should be rewarded for this societal good. As such, working with the Land Banking Group, they are now paying soil carbon credits to 2000 of the farmers they work with, with plans to increase this to 250,000 farmers by 2028. They estimate that if all famers across Egypt adopted these techniques, they could not only offset up to 25% of Egypt’s total GHG footprint, but also save a significant amount of water and create secure livelihoods for the population of Egypt working on the land.

Is this scheme absolutely perfect? Not yet. But is it an exciting step towards shifting the balance of financial advantage towards genuinely healthy and sustainable food production that is part of the climate solution? Yes. The positives and possible pitfalls of these carbon markets is the subject for a whole other blog, but the leadership shown by organisations like SEKEM should be applauded, as it’s clear that we can’t rely on business as usual if we’re going to speed up the agricultural transition at the scale and pace now needed.

The question then is, how do we responsibly scale these sorts of initiatives in a way that drives genuinely positive change? A reasonable criticism would be to assume that companies, such as those involved in the SMI Agribusiness Taskforce or those taking part in new carbon offset schemes, are just making empty commitments – using offsets as an excuse to keep polluting or using their support of regenerative agriculture as a form of greenwashing. That’s exactly why we feel our involvement in this group is so important. The proof will be in the action these companies take next, and we will be there to hold their feet to the fire. Of course, the inconvenient truth for them is that if everyone is measuring the impact of their supply chains – including the farms they source from, lend to or invest in – in a common way, greenwashing will actually become quite a difficult thing to do.

I have had a number of really positive conversations about the journey ahead, over the last couple of days, particularly in regard to the team from the UAE taking forward the COP presidency into next year – apparently, they really mean business. There is also a lot of talk about food and farming being genuinely central to the agenda at COP28. Let’s pray this is true, as it feels like a huge, missed opportunity at the moment. As an organisation in an interesting position of influence right now, due largely to Patrick’s leadership, we will do our utmost over the next 12 months to move food and farming further up the agenda, as well as making sure big businesses really do mean business when it comes to all of this.

To end, a reflection on where we’ve been. Sharm El-Sheikh is a strange place. When we first arrived, I couldn’t understand why on earth it was chosen as the location for this conference. However, as the week went on, I realised it was actually quite perfect. Sharm is located on the coast, at the foothills of the serene Sinai mountains. The buildings are mostly sprawling and extremely ugly and the six lane highways (built just for COP) are completely over the top. And yet, after a long day of meetings and events, you only need to swim a few hundred yards off the beach to witness some of the most beautiful coral reef ecosystems on earth. Although there are early signs of bleaching, the fish and reef are breath-taking – it’s a stark reminder of what it is that we’re all fighting for.

Then, you walk back up the beach, into the metropolis of hotels and meeting halls to do it all over again. So, whether or not it was planned (probably not), Sharm fittingly represents the deep contrast between pristine nature and ill-considered human intervention. It’s now up to all of us to re-address this balance.

Recordings of all the sessions that Patrick and Adele were involved in at COP 27 will be posted as soon as they become available.