Home > News + views > The case of the exploded Dutch chickens

The case of the exploded Dutch chickens

The supermarkets’ decision to stop selling this meat has meant that in one fell swoop, the amount of this type of chicken on Dutch shelves has been cut in half. The tale of the infamous plofkip is one of changing hearts and minds, and of a furious campaign from one animal welfare group: Wakker Dier.

The Netherlands is the most chicken-dense nation in the world. In a country that punches well above its weight in terms of intensive agriculture and food production, there’s an average of 47 million broiler chickens alive at any given moment. In the region of Venray, they outnumber people 86 to one. In 2014, 552 million broiler chickens were slaughtered, more than a half a billion, around 65% to 70% of which were exported. Though the majority of the Netherlands’ chicken goes out the country, the Dutch do have a robust appetite for it, with the average person eating 18.4 kilograms a year in 2014. Around 90-95% of that chicken came from the fastest growing breeds – plofkips, in other words.

In 2001, Wouter Klootwijk, an investigative journalist who explores and exposes the food industry, dedicated an episode of his television show, Keuringsdienst van Waarde, to the realities of the country’s intensive poultry industry. He coined the term ‘plofkip’, but it was to remain dormant – along with, to a large extent, the issue of factory farmed chicken – until 2012.

Their motto is ‘minder maar beter vlees’, ‘less meat, better meat’, their goal to reduce meat consumption in the Netherlands by 25% before 2030, and to ensure that all meat sold in shops bears a minimum of one beter leven (better life) star by then. (The beter leven star system is devised by Dierenbescherming, the Dutch equivalent of the RSPCA.)

Before targeting the retailers Wakker Dier had to reach the public, raise consciousness, and reveal the reality behind the cheap chicken on supermarket shelves, and on plates at home. They began a television, radio and billboard campaign that to date has cost two million Euros, stating the facts behind the production of factory farmed chicken and showing what it lookedlike. Recognising the power of a label, the campaigners borrowed from Wouter Klootwijk‘s wordbook, and branded it ‘plofkip’.

The crucial characteristic of the plofkip was its short lifespan, it was bred to grow from a 50g chick to a 2kg chicken in just six weeks, 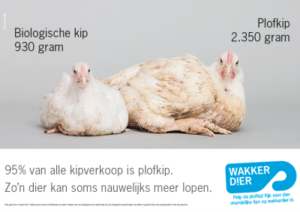 “the equivalent of a four year old who weighs eighty kilos”, says van Ormondt. Another key characteristic was living conditions; plofkips get packed into barns in their tens of thousands – around twenty chickens per square metre – where they spend the entirety of their lives, with no natural air or light, never to go outside. Plofkip bought in a supermarket might well have suffered from health issues. Respiratory illness and eye problems from dusty, warm ammonia-polluted air are very common, as are breast lesions and hock burns, the result of sitting in unchanged, soiled litter for six weeks. The plofkip’s accelerated growth, particularly in the chest area, commonly leads to cardiac issues or immobility. And a plofkip would typically have been a lifelong recipient of the equivalent of three daily doses of antibiotics in their feed or drinking water.

Familiarising consumers with the facts takes time, and herein lies the power of the catchy and ghoulish ‘plofkip’ label. “You don’t have to explain anymore, you just show the chicken and say the name, and everyone knows it’s bad”, says van Ormondt.

The moment plofkip became the catchall term for the worst of poultry factory farming came just three months into Wakker Dier’s campaign, when corporate giant Unilever announced it was eliminating meat from the fastest growing chickens across its range of products. Considerable media interest ensued. Journalists and commentators latched onto the handy and evocative term, and it entered the Dutch popular consciousness. Wakker Dier rode this wave of momentum, relentlessly broadcasting adverts naming and shaming the supermarkets.

One television advert begins with packets of chicken sliding along a supermarket checkout, it pans out to show the four major supermarkets’ chicken in its branded packaging, before the fillets and thighs of meat begin slithering out, amalgamating into one macabre lump of chicken-shaped flesh, that cuts to an image of a wretched plofkip keeled over in a dark barn. A voice says: “stop the plofkip at Albert Heijn and Jumbo”. 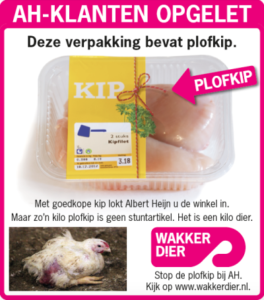 Dier exclusively targeted the supermarkets. Did they ever go down the governmental lobbying route? “No”, says van Ormondt, “because that’s no use”.

In the face of relentless public humiliation, the supermarkets came together in 2013 and committed to making some advances on the chicken front by 2020. Vague terms like ‘the new chicken’, and ‘the chicken of tomorrow’ were banded about, but the proposed changes were minor: the birds would live a few days longer, get a handful of straw and a smartphone’s-worth more living space. With a flair for words that characterised their campaign, Wakker Dier dismissed it as ‘flopkip’.

They continued their tenacious campaign and the tipping point came in December 2015, with the big news that Albert Heijn, Jumbo and Lidl were to go plofkip-free within the year.

“From now on, we will no longer sell the regular fast-growing chicken,” reads a statement from Albert Heijn, the Dutch equivalent to Tesco, “the ‘new chicken’ comes from a special slow-growing breed, which is stronger and healthier, thus improving the quality of life of all chickens bred for meat sold at Albert Heijn.” The big difference comes down to breed. Birds like Hubbards and Rowan Rangers who live slightly longer will replace the Cobbs and Ross’, their slower growth puts less pressure on their health, therefore reducing reliance on routine antibiotics. Plus, the supermarkets have committed to simulating a day/night rhythm in their barns.

However, these chickens will still fall short of attaining the ‘better life’ star Wakker Dier aim for, which stipulates that chickens must live a minimum of 56 days, that a maximum of twelve birds (25 kilograms) are kept per square metre, and that there is natural light and some outdoor access. So is it a victory for Wakker Dier, or is it a half measure and some good PR for the retailers? “It is a very big breakthrough”, says van Ormondt, “on the larger scale it’s the first to be made in the last thirty years. The last thirty years have just been about making the chicken cheaper and cheaper, and now they’re making it more expensive. And for them it’s scary, to see if the consumer will still buy it. And now almost half the chicken consumption in the Netherlands is plofkip free, in one step.”

Though Wakker Dier gives the retailers kudos for making the change, they’re not the types to let the supermarkets off the hook too easily. The campaigners kept an eye on them and quickly realised that Lidl’s declarations were somewhat disingenuous. The German supermarket had continued using plofkip breeds, only feeding them less for slower growth.With zero tolerance for such tactics, Wakker Dier mercilessly ousted Lidl – and put them straight back on the target list.

And though the campaign group has spearheaded an unparalleled breakthrough in the fight against factory farmed chicken, they’re not going to rest on their laurels. In 2016 they will retrain their laser focus, this time targeting restaurants and fast food chains. After a year of naming and shaming the hospitality industry, they’ll be back on the backs of the supermarkets, campaigning for a ‘better life star’ for all chicken. Wakker Dier, it seems, won’t stop until it rids Holland of its exploded chickens.