The Sustainable Food Trust’s annual conference at Fir Farm kicked off with warm sunshine on a beautiful, temperate day. It was a welcome start to a conference that had been delayed for two years as the COVID-19 pandemic put a stop to the normality of everyday life. Meeting again in person, across the two days of the event, with the buzz of friendly reconnection and lively discussion, along with good food filling us up at every break, was a special treat.

Fir Farm is a fantastic venue – the stunning renovated pole barn is set in the rolling hills of the Cotswolds. Two previous Fir Farm Conferences in 2018 and 2019 have been held here and it was great to return to this site for A Roadmap to Sustainable Farming. The farm itself is emblematic of the necessary direction of travel towards more sustainable farming practice – it’s a 700 acre organic mixed farm producing native breed cattle, sheep, pigs, poultry and arable crops and its ethos is devoted to farming in harmony with nature.

The Conference was framed by the launch of the Sustainable Food Trust’s report, Feeding Britain from the Ground Up, which proposes a plan for how the UK could sustainably feed itself. It’s both a radical and eminently sensible proposal – driven by a simple presumption that, as much as possible, “we should align our future food consumption to the output of sustainable farming systems in the regions in which we live”. The result of this would be a reworking of our food production; instead of further industrialisation, it would be based on regenerative, biologically based, mixed farming systems, with an increase in land for trees and nature. This would result in a major change in our diets, with the availability of UK-produced beef and lamb remaining stable, but with a significant decrease in chicken and pork due to the shift away from intensive, grain-fed systems to higher welfare production, partly necessitated by the 50% reduction in total grain production. Alongside this however, the sustainable production of vegetables, fruits and pulses would significantly increase, with these being grown more widely across the country.

Food was, of course, at the heart of the conference from start to finish – but the focus on it was more pressing in the context of the current global situation. The war in Ukraine is not distant and singular, it is expansive and pervasive, its impact rippling out across world. Minette Batters spoke forcefully about rising poverty, noting that 7 million people in Britain are now in critical poverty – and this will spill over soon, as she commented, “We’ve got skyrocketing inflation, and my goodness, we’ve got shortage of availability. You don’t take 30% of the world’s grain out and just expect to sit back and hope that life will be OK… this isn’t about poverty, this is about famine and migration of peoples – and the G7 countries do not know what is headed towards them.”

Farming for climate, nature and health

The opening session focusing on ‘Climate, Nature and Health’ – the trio of our most important concerns – asked the question, ‘How can farming respond?’ The panel of remarkable speakers, The Rt. Honorable Lord Deben, Chairman of the Committee on Climate Change, Minette Batters, President of the NFU, Gunhild Stordalen founder of the EAT Foundation and Henry Dimbleby, Lead on the National Food Strategy, raised challenging questions from all the participants, that were not easily resolved. Meat and the role of grazing livestock in sequestering carbon was a key point of discussion with Minette Batters arguing that “the conversation around meat and grass has not been attended to”. Henry Dimbleby voiced his concern that the science still needs to evolve in relation to the potential of grazing livestock to sequester carbon, and that further, we can’t sequester enough carbon to shift climate change without reducing meat consumption. Gunhild Stordalen made a notable point on the gaps in knowledge around the impacts of different production systems and how important it is to consider this.

There was clear frustration with Government across the panel, especially in relation to the government’s recent food strategy, with Lord Deben arguing that “to call it underwhelming is to dignify it”. Batters further asserted that it has “no cohesion and, more broadly, no clear understanding of the relationship between agriculture and food”.

And in relation to government more generally, Stordalen reminded everyone that governments across the globe are, largely, not on target for their commitments to keep global warming to under 1.5 degrees – which should be deeply concerning for everyone. She is still waiting for the UN and national Governments to begin to react. 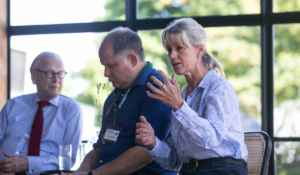 Other panels across the conference included a focus on ‘Measuring Sustainability’ with the SFT’s Deputy CEO Adele Jones giving an update to the ground-breaking work of the Global Farm Metric which provides a harmonised framework for measuring on-farm sustainability utilising a range of metrics to evaluate social, economic, environmental and animal welfare impacts.

James Close noted the importance of investment – which was a key feature of the ‘Green Finance’ session as well – which is needed to drive change in farming, with Morgan Gillespy reminding everyone that production practices need to shift within eight years. The tremendous potential of regenerative and agroecological practices to be transformative in farming is part of why an expansive global metric is so important – and it can offer a roadmap to increasing profitability.

The focus on profitability carried on in the ‘Green Finance’ session, which was moderated by Sir Alan Parker. He commented on the much more active role that business is taking in the transition to a more sustainable farming future and money is a key part of this. There has been a sea change in the last three years, recognising the value of nature and nature-based solutions to our financial systems. “The frameworks for catalizing change are becoming clearer,” commented Christine Delivanis. Alasdair MacLeod also commented that farmers don’t necessarily have ways to understand their natural capital, and that profitability “is not just about buildings and stock, it’s about the wider ecosystem of the farm”.

Profitability’s relationship to natural capital is slowly being realised, and it is shifting the proverbial playing field and changing the game in interesting and enlightening ways – the panel was surprisingly hopeful and the change that’s needed is starting to feel real.

Sue Pritchard of the Food, Farming and Countryside Commission chaired the closing panel on ‘Local Food Systems’, balancing a conversation that was both global and local at the same time. Ikenna Nzewi, whose company works across the African continent to relocalise food processing for small-scale farmers, talked about the importance of protecting natural capital and ensuring economic development is balanced against it. His local focus on one of the world’s largest continents recognises the importance and impact of small-scale farming and the value of short supply chains. Marisa Heath discussed issues with local meat, particularly the importance of local abattoirs to ensure that farmers can have the meat they produced returned to them for local sale. The decline of small abattoirs has been an ongoing concern of the SFT, and Heath has worked closely with the SFT on this issue through the Abattoir Sector Group. Heath stressed the importance of working across communities to support local food production, promoting its value. The role of local food in the community was further discussed by two farmers, Andy Gray of Elston Farm and Nathan Richards of Troed y Rhiw Organics, in relation to local markets and procurement.

Returning to the local was a fitting close to panel discussions, with Sue Pritchard sharing her thoughts on the conversation, saying, “I was very fortunate to be able to moderate this session [on local food systems], it’s just that wonderful reminder that the things that we talk about are happening already, they are happening right now all around the UK and, as we heard from Ikenna, around the world. There are activists and farmers and growers that are getting on and doing things in super practical ways, rolling up their sleeves and getting on with bringing about the changes that we need, bringing that future to life all around us. It was a lovely inspiring way to end the conference for me.” 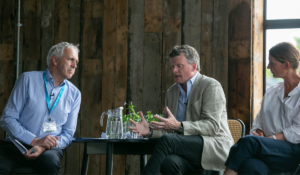 A vision for the future

Patrick Holden, CEO, took to the stage to close the conference, calling on the government, private sector, farmers and civil society to back a ‘Food and Farming 5-point plan’:

Patrick closed the conference explaining, “We need these gatherings because there is some sort of mycelial consciousness shift that happens when we all come together”.