The Swabian Alb is a rural region of outstanding beauty, but farms are often poor, soils are bad, the growing season is short, and in most years, there is either too much or too little rain. 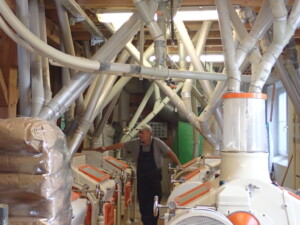 For some farmers things changed in 1991 at a post-match get together of the village football club. Over a beer, Heiner Beck, the local baker, asked the farmers among his teammates whether they might be up for growing heritage spelt again. Like his father, Beck had always used traditional spelt flour. It has a strong, nutty flavour and holds about 15% more water, which means that the dough has to rest for 18 to 24 hours before breads and rolls are ready to be baked. When Beck noticed a decline in quality, he had the flour analysed and found that there was hardly any difference between the spelt he used and ordinary wheat flour.

With its tall, strong stems and tough husk, heritage spelt does well under rough climatic conditions, but it yields about half as much as wheat. By breeding spelt for better yields, breeders inadvertently lost the grains unique qualities. That autumn, just a few months after the discussion at the football club, four farmers once more planted traditional red grain spelt which was milled at the local mill. Today, the mill runs five days a week and supplies not just Heiner Beck’s bakery, but local pasta producers, restaurants and private customers. With 260 employees now, Beck runs 20 bakeries, supplies various other outlets and sells online. And he doesn’t just buy spelt flour locally, but also milk for creams and fillings, eggs, honey, oil, linseed and spices like caraway. ‘Local and organic if possible but always tasting great’ is his motto. 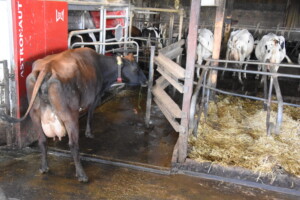 Over the years, the farmers have taken the initiative to produce crops Beck might need. Wilfried Holder, one of Beck’s former football mates, grows heritage spelt, heritage wheat and Alb Leisa lentils, a variety that was traditionally grown together with spelt: the lentils supplied nitrate, while the tough stalks support the climbing lentil plants. Today, this unique lentil variety* is mostly grown with false flax (Camelina sativa).

Another plant common in the region is caraway, which Holder decided to grow commercially. After the harvest at the end of August, stepping into Holder’s barn is a sublime experience, the aromatic, subtle and yet intense fragrance of caraway lingers in the air like a good perfume. There are no manuals for growing specialty crops like caraway, but Holder loves a challenge. This year he tried growing coriander and fennel for seed, but the summer was too wet. He will certainly try again next year because several regional food producers have already declared an interest in buying from him.

At times, Heiner Beck gets offered produce he didn’t know he needed. A few years ago, a grower gave him a box full of watercress with the tip of each sprig missing. The high-end restaurants the grower supplied needed only the top few leaves – would Beck be able to use the rest? Beck processed the watercress into a vivid green, slightly bitter pulp. To balance the taste and for some contrast, he caramelised carrots, added some fried leeks for extra chewiness, and baked the whole lot into colourful rolls. They turned out to be an instant hit with customers and have become seasonal favourites. 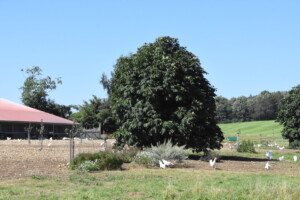 To find a local producer for organic milk, Beck had to work a little harder. Jürgen Tröster keeps 65 Holstein-Friesians on a farm just down the road from the bakery, but he had just invested into a milking robot and feared that conversion to organic would mean getting deeper into debt. For Heiner Beck, supply is a question of the quality of produce, fairness and trust: a handshake will do, no contracts are signed. Traditionally, on the Swabian Alb, a litre of milk was sold for the price of a pretzel. When Tröster told Beck that he would supply organic milk for €0.80 cents, the current price of a pretzel, Beck agreed. To put that into perspective: the current farmgate price for organic milk in Germany is about €0.50 cents per litre, and for conventional milk is €0.37 cents. Since 2015, Tröster delivers fresh milk to the bakery every single day. ‘Now he keeps asking when I will put the price up for pretzels in the shop,’ says Beck with a smile. He told me that when it comes to creams and fillings there is no substitute for fresh, organic milk and that’s why, to him, paying €0.80 cents per litre makes financial sense: the supply is secure, and he can guarantee the quality of the baked goods he produces.

Customers really want to know where their food comes from, says Beck, but in the end, sales depend on quality and taste. Growing good produce costs money and committed partnerships, he says. ‘If the farmers can’t make a living, I can’t get the ingredients I need.’ A kilogram of poppy seeds costs around €3.0, says Beck, who pays €10.0 per kilogram to a local grower. ‘Because of the erratic weather we’ve been having, this farmer had three failed harvests in a row. If I don’t want him to give up producing poppy seeds altogether, I have to help him out financially.’

Beck also supports innovation, especially if it helps to improve animal welfare – another issue customers care about a lot. Karin Maier is an organic farmer with 3000 laying hens. Beck buys about a third of all the eggs the hens lay, including the very small ones for which there is practically no market anywhere else.

Maier gently knocks before she opens the door to the chicken barn, the hens know the signal and move away from the entrance. There is a long row of wooden laying boxes and perches next to a free area for scratching, pecking and sand bathing. In daytime, the hens and several cocks have free access to a garden area. Some of the hens rest in the shade of a tree with low hanging branches, clucking contently. Others prefer the free space close to the barn – should a hawk show up they will hopefully all make it inside in time. Towards the back of the garden the grass stands tall and several small huts provide shelter in case of danger from the air. It looks like chicken paradise, but Karin Maier is not happy. ‘The hens are overbred,’ she says, ‘even with good feed and supplements, laying eggs takes a real physical toll on their bodies.’ 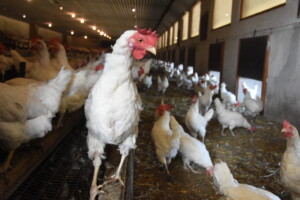 It has taken two decades for organic breeders to breed a ‘dual use’ chicken variety. The smaller, more robust hens lay fewer eggs, but the male chicks can be raised into sizable broilers. The hens are capricious, says Maier, they lay their eggs whenever they want and often not in the nesting boxes. Keeping them is very labour intensive, but she wants her chickens to have a good life and will therefore restock with a flock of this dual use breed. At present, Maier on average charges €0.20 cents per egg, in future she will need €0.27 cents per egg. When she discussed her plans and the cost increase with Beck, he was on board immediately.

The network of farmers and growers Heiner Beck works with directly has grown to about 40. As a result, a lot more organic, local produce has become available in the region. It is increasingly snapped up by local small and mid-size food producers and manufacturers. Farmers get good prices, which allows them not to solely focus on yields, but rather invest in growing high quality, more diverse crops and farming in a sustainable, environmentally friendly way.

‘Halbzeit’ showcases the wealth of excellent food the Swabian Alb region has to offer. And with 300,000 motorists passing by on the A8 motorway every day, more customers will get a taste of what a regional food system has to offer.

* The Alb-Leisa was included in the Slow Food Ark of Taste in 2012. Originally, most farmers on the Swabian Alb grew the variety, but after the war, lentils went out of fashion and by the 1980s the Alb-Leisa lentils had disappeared. There was no more seed – until in 2006, when a few of the Swabian lentils were discovered at the seed bank of the Vavilov Institute in St Petersburg. They were brought back to the Swabian Alb and propagated. When a few years ago a member of a local church was scheduled to visit St Petersburg, Wilfried Holder gave her 10kg of Alb-Leisa to give back to the Vavilov Institute, which she duly did.

Marianne Landzettel Marianne Landzettel is a journalist writing about food, farming and agricultural policies in the UK, the EU and the US. She is the author of: ”Regenerative Agriculture – Farming with Benefits. Profitable Farms. Healthy Food. Greener Planet”. Before working for the BBC World Service, she was the UK correspondent for German Public Radio. She lives in London.