To be truly systemic, one has to include all aspects of the problem. So what is ‘systemic’ or ‘systems thinking’? In simple terms, it is an approach for analysing complex issues by viewing them holistically, as purposeful systems containing interdependent variables, stakeholders and perspectives. This allows an awareness of one’s own bias and limitations. Systems practitioners use simplified diagrams to uncover key issues and when this is done comprehensively they are able to see the interwoven social, economic, political and environmental dimensions.

The issue under investigation here is the global food system, the purpose of which is to feed humans (and to a certain extent livestock) over a sustained period of time. It is embedded in and dependent on ‘macro’ systems as shown in the diagram below.

The food system is one of many systems tasked with fulfilling human biological needs. These anthropogenic systems depend on the wider environmental life support framework provided by the Earth, including the atmosphere, energy of the sun and the global water cycle. In order to better appreciate food security and sustainability, it is first necessary to understand the main influences on and causal connections of the food system. The Food and Agriculture Organisation (FAO) provide a good account of this in their publication ‘The future of food and agriculture’. A simplified influence diagram can be derived from their Executive summary: 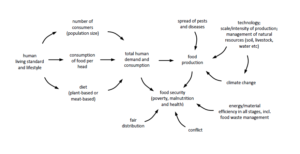 This diagram shows that lifestyle and living standards (how humans live and the means by which they live) affect the total amount of demand and consumption. For example, people living in a developing country will probably be on a cereal- or plant-based diet due to financial constraints, most importantly, the cost of meat. They may also be lacking enough food generally (in terms of quantity) or specific nutrients (relating to food quality). On the other hand, the diet of people with a higher standard of living, will generally include more meat. But they also have a choice – they can opt to eat more or less food generally, eat more or less protein, or choose a meat-based diet or a plant-based diet.

Most environmental organisations agree on the need to decrease the intensive farming of meat and make it more sustainable. Wherever we choose to stand, in the pro-meat, pro-vegetarian or pro-vegan camp, the above factors will have an effect on the total demand and consumption – both of which contribute to climate change.

The ratio of food demand over production is the main factor affecting the level of food security, but other factors include fair food distribution, as well as energy and materials efficiency which has an influence on all variables.

Apart from food, the other common variables in this diagram are people and animals. People also have rights, needs and perspectives which need to be accommodated; and they have biases and cognitive limitations which should be acknowledged.

Systems thinking dictates that in the early stages, stakeholder diagramming should be undertaken associatively, by brainstorming, to avoid anyone being left out of any change-making processes. After a few iterations, a grouped or consolidated diagram should emerge. An example stakeholder spray diagram is shown below. 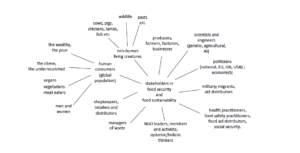 The degree of dependency, overlapping and complexity of these human systems results in a diversity of values and perspectives in terms of improving food supply and demand. In other words, the more complex the social situation, the greater the number of stakeholders and interpretations.

This brings us to the two main philosophies concerning solutions. Many food experts focus on the need to simply increase food production to meet humanity’s growing demand; others advocate a more holistic approach and consider the long-term sustainability of both food production and consumption, taking into account nutrition, eating less meat and addressing the current unfair distribution of food. For a good description of these two approaches see Philippa Griffiths’ article Can food and farming policy become more holistic?.

Buying ethically-sourced meat and reducing overall meat consumption seems to be the way to reduce the negative impact of food production on the environment and our health. However, a more systemic approach would include global population size as another variable which humanity has some control over. The quantity of food produced and how it’s produced and consumed, is relevant to sustainability, but so too is the number of consumers. In the past 100 years total carbon emissions (a good indication of consumption) has increased about 15 times. This is due, not only to the increase in emissions per head (nearly a 4-fold increase) but also due to the number of consumers or population growth (again, nearly a 4-fold increase). It seems that population growth is as much to blame for our overall consumption as is our lifestyle.

Having to feed 9.8 billion humans by 2050 or 11.2 billion by 2100 (for graphs see UN World population prospects 2017) should not be considered a fact of life but rather a consequence of humanity’s unconsidered reproductive impulses – behaviour that could be changed in a rational, non-coercive and cost-effective manner.

It is evident that population growth is lower in countries where women have better education and a more equal say in family planning and better access to services. Governments that have been implementing this (e.g. Bangladesh, Iran, Ethiopia, Thailand, Indonesia) now have a lower fertility rate and ‒ at least in the case of Indonesia ‒ both a reduction in malnutrition and poverty and faster economic growth. A current and future concern is Africa whose population is expected to balloon from 1.2 billion to 2.5 billion by 2050. The number of people worldwide suffering from chronic hunger is more than 800 million. Will a growing population make it easier or harder to reduce this suffering? According to Jonathon Porritt: “… to meet the needs of the 215 million women around the world who currently have no access to effective contraception would cost around $3.5 billion a year ‒ a fraction of today’s aid flow.”

Many environmental NGO’s openly acknowledge the impact of population growth, including Friends of the Earth. In their recent policy position on population (November 2017) it was refreshing to see that they now talk about the causal link between women’s rights and smaller, more sustainable families. When women are educated and have access to family planning services, they tend to have children later in life and fewer children overall. Recent research has calculated the eye-opening impact of having one less child. Nothing else comes close ‒ it has a 20 times greater beneficial impact on the environment than living without a car and 70 times more than being a vegan. The research is summarised in the diagram below and includes the annual emissions of every action. 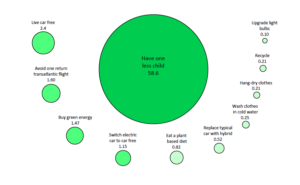 While the impact of having one less child is significant, this doesn’t mean one should disregard the other impacts. The global predicament is far too urgent, dire and interconnected to be tackled from one angle only. Venturing out of echo-chambers and considering the views of others, as well as the disempowered, will help create a joined-up, systemic mindset. Patrick Holden, the CEO of Sustainable Food Trust, touches on this point in his conciliatory response to Jonathon Porritt’s piece for the SFT website: “In relation to over-population it’s taken a long time for my eyes to be opened to the urgent need for further action.”

It is useful to periodically explore one’s own thinking and potentially re-evaluate long-held preconceptions. Admittedly, focussing on reducing the consumption of meat can have unintended consequences if it diverts from holistic solutions, but so can the avoidance of uncomfortable issues such as population growth.

Ivan Cicin-Sain writes for Population Matters about the issue of a rising world population and how a systemic approach is needed to address it.