The dominant narrative of the dairy industry is a depressing one. Retailers squeeze processors, who in turn squeeze farmers to keep costs down. Making a good profit, it seems, is dependent on making someone else pay for it.

Unfortunately for dairy farmers, they are at the bottom end of this downward squeeze. The only people below them are the Filipino migrants found working illegally on a number of dairy farms in England.

To survive, the dairy farmers are told they must scale up or get out. Judging by the statistics churned out by the government each year, they are doing just that, with a trend towards ever fewer dairy farmers, running ever bigger herds. The average herd size in the UK is now around 125 cows.

Within the dairy industry, the idea that small-scale, local dairy farms might have a significant future, in the UK or elsewhere, is seen by Dairy UK and others, as highly unlikely.

Yet the trend towards a small number of large-scale intensive dairy farms (think of the 8,000 cow, so-called ‘mega-dairy’, proposal in Nocton a few years ago) is something that we should all be wary of sleepwalking towards. This reality is already underway in China, where dairy farms with 10,000-39,000 (!) cows are being developed. Cows are permanently housed indoors and subjected to a high-yielding regime. Such an intensive system is unlikely to make best use of the grass we can grow in this country or others, which is of course, what cow’s are naturally designed to eat. Not to mention the additional challenges of waste disposal, pollution and animal welfare.

While a recent industry-led report into the future of the dairy industry talks about maximising production and boosting exports, judging by the hostile reaction to the Nocton-farm proposal, the British public don’t really like the idea of their milk coming from anonymous mega-dairies.

However an alternative model does exist. A model that would provide more income for farmers and local communities and less to the handful of supermarkets and milk processors that dominate the UK dairy sector. What’s more, it would also give the public a fairly-priced, locally-produced carton of fresh milk.

That model is micro-dairying, with a number of small local milk producers setting up and running their own dairy processing units. By producing, processing and packaging the milk themselves in smaller operations, dairy farmers can bypass the big processors and retailers and sell directly to local consumers.

As well as re-creating a local milk supply chain and reducing the unnecessary transport of huge volumes of milk around the country, it would also help to re-establish a market for small-scale dairy farmers – exactly the type of family farms that have been forced out of the industry by the need to scale up and keep hold of milk contracts with one of the big five processors that dominate the UK dairy sector.

Nick Snelgar, of Maple Field Milk, is one farmer who has re-entered the sector as a micro-dairy farmer. He produces milk from his small herd of Aryshire cows, using a tractor-powered mobile milking parlour. He pasteurises, packages and sells it himself within a roughly 10-mile radius of his farm, in the village of Martin on the Dorset/Hampshire border.

For a region that has long lost its local dairy supply network, Nick is bringing back fresh local milk (the 1-day-old rather than the up to 10-day-old milk that we buy in supermarkets) to the community. Nick’s customers include service stations, shops, theatres, pubs and cafés, as well as domestic doorstep deliveries. It’s a full-time job for Nick to produce and deliver the milk himself, but he is already hiring local staff to help him grow the business, as well as buying milk from a neighbouring dairy farm.

‘The dairy industry has got into the hands of just a few powerful companies, but it shouldn’t be like that,’ he says. ‘We’re told the only people who can make money out of dairying, are the mega-farmers. I do not believe that is true. The point of Maple Field Milk is to prove that it is possible to set up and run a profitable micro-dairy herd, with locally processed milk, serving a local marketplace.’

Another of those running a micro-dairy is Susan Garbett, who with her husband Julian runs a 40-cow free-range herd at Holmleigh Dairy in Gloucestershire. They deliver milk to 600 customers, all within a 20 mile radius of the farm. ‘People really appreciate that it is a local product. They know that we have an outdoor, free-range herd so they come and drive past our fields and see the cows that provide their milk every week,’ says Susan.

It is not just about local provenance either. Unlike the product we pick off the shelf in the supermarket, the milk from micro-dairies is invariably unhomogenised. It is often still pasteurised to kill harmful bacteria, but even the semi-skimmed varieties are sold with the almost forgotten creamy top.

‘The difference in the quality of milk, when the focus is on producing quality over quantity, is remarkable and it feels strange to call what we produce and what you pull off the supermarket shelves, by the same word – milk,’ says Josh Healy, who runs North Aston Dairy, a 19-cow herd in Oxfordshire, providing organic milk twice a week for 250 local customers.

As well as new and established micro-dairies, there are also a number of larger dairy farms that are processing a proportion of their milk themselves and selling it locally. This includes around a dozen members of the organic dairy cooperative, OMSCo. However, for larger farms tied into milk contracts this isn’t always be possible, as major dairy processors often stipulate against, or disapprove of, such activities. 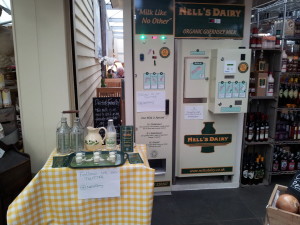 For now, micro-dairying offers a good business model for small-scale dairy farmers and new entrants, if they can overcome the capital costs of getting a hold of farmland and building a processing unit. Nick, at Maple Field Dairy, built his with the help of a grant from the Prince’s Countryside Fund. North Aston Dairy financed its start-up costs by issuing ‘cow bonds’ to local residents willing to make a fixed term investment for five years, with a dividend payment of three per cent per year. Others, such as Nell’s Dairy, have tried to overcome delivery costs by selling their milk through vending machines, with three in operation so far at a local pub, holiday park and garden centre.

While the idea of bucking the trend towards bigger farms and higher yielding cows might seem reckless to some, public surveys show a clear demand for locally-produced food. With more than a dozen micro-dairy farms in operation across the UK, it could yet be the start of a phenomenon that grows beneath the radar of the big retailers, tapping into a demand for re-localised food production, based on healthy and sustainable values.