Home > News + views > Small abattoirs in Germany: You get what you pay for

Small abattoirs in Germany: You get what you pay for

How did we get here?

The tradition of slaughtering animals on farms or at the local butchers started to fade at the beginning of the 20th century, when municipal abattoirs were set up as a way to deliver fresh, safe meat to urban customers. Regional abattoirs in more rural areas were run by local authorities. After the Second World War, businesses grew and butchery slowly began to turn from a craft into an industry. The EU expansion in 2004 allowed for contractors to recruit cheap labour, and in particular Eastern Europeans were willing to do jobs most Germans avoided. For very little money, they work on the kill floor and on the assembly lines of large meat processing facilities.

In 2009, new EU regulations required all slaughter facilities, including butchers, to be licensed. The rules were designed with large facilities in mind. For small abattoirs and craft butchers, compliance often meant costly investments. Most butchers found it easier and cheaper to buy in meat rather than slaughter, and many local abattoirs closed down.

New packaging technology further sped up the concentration in the meat industry: protective gas packaging of meat allowed supermarkets to sell prepacked fresh meat. Large abattoirs no longer just slaughtered animals, but processed and packaged individual cuts, ready to be displayed in chiller cabinets. In Germany, 50% of all fresh meat is sold through Aldi discount supermarkets and ten companies slaughter and process 79% of all pigs.

It’s not just the regulatory system that favours industrial slaughter, the fee structure does as well. The more animals are slaughtered in a plant, the cheaper it gets. In Germany, hygiene inspections and food safety controls are carried out by public officials. The controls are required by law, but prices can vary from county to county. And big players pay less. Take meat inspection. According to the Unabhängige Bauernstimme, (September 2020, p. 3), a monthly publication for organic and family farms, Tönnies and the second biggest meat processor, Westfleisch, pay less than €2 (£1.70) per pig, for independent butchers who slaughter only a few animals per week, the fee can be as much as €12 (£10.23).

Bauernstimme calculated what that means: Tönnies slaughters 16 million pigs annually, but the company pays less than €30 million in fees. Westfleisch kills seven million pigs per year and pays less than €12 million. If, for example, the inspection costs were fixed at €6 per animal, the cost to Tönnies would be about €96 million and €42 million for Westfleisch. ‘It is easy to see what it would mean for a company that posts about €10 million in profits annually; if it were treated like your average butcher – the company would be bankrupt,’ writes the Bauernstimme.

Slaughter waste disposal, too, gets more expensive as fewer animals are processed. The county around the city of Cloppenburg in northern Germany is known as a centre for the factory farming of pigs (and chickens). The fee for the disposal of slaughter waste from one pig is €40.62, get rid of the slaughter waste of a thousand pigs and the charges drop to €0.56 per animal.

In 2011, Germany introduced specific rules that allows farmers to kill animals on pastures, if they have been grazed outside all their lives. What initially was designed to be an emergency measure for the humane slaughter of injured animals made sense to animal welfare activists, farm groups and consumers; on farm slaughter avoids the stress of transport to the abattoir, farmers can take care of their animals to the very end and consumers really do know where their meat comes from. With that in mind, the EU commission last year, for the first time, published a framework for on farm slaughter. The mobile units must be run by a licensed butcher or abattoir, a vet has to be present during slaughter and animals can be gutted. Advocates of mobile slaughter units in Germany consider this to be a good start but hope the process can be simplified (December 2020, p, 6). In their opinion, the mobile slaughter units need not be very sophisticated as long as good hygiene can be maintained. And if such units were in regular use, the presence of a vet would not be needed – which would considerably reduce the cost for on farm slaughter.

Small is not always beautiful

With a general election this September and several state elections scheduled throughout 2021, German politicians are keen to show that they learnt lessons from the pandemic by introducing popular policies, such as initiatives for small, local and regional slaughter facilities, which, they argue, would provide better working conditions and higher animal welfare standards. Lower Saxony’s agricultural secretary went as far as demanding a small abattoir for every county. First off the mark with a concrete plan and a budget of €11 million (£9.4 million) was Baden Württemberg, a state in the southwest of Germany. The modernisation of existing facilities will be funded up to 40%. Funding is also available for new slaughter units owned and run by producer associations and for the acquisition of mobile slaughter units with animal welfare being the highest priority. 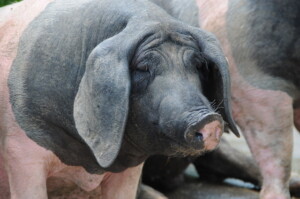 In southern Germany, farmers and meat producers have been taking matters into their own hands for a while. The area around Schwäbisch Hall in Baden Württemberg is known for a particular heritage breed of pigs, sporting a dark head and behind with a wide pink ‘belt’ in the middle. The breed has been listed on the Slow Food Ark since 2014. In 2001, the local abattoir was closed down. A group of producers raising the local black and pink Hohenlohe heritage pigs decided that driving their animals to a slaughter facility in a different region would harm the brand. They got together, bought the slaughter facility, modernised it and invited local butchers to do the processing. Today, the abattoir has become part of the marketing strategy – animals slaughtered and processed there stand for good quality, craftsmanship and local production and they are popular with consumers and restaurants. Nevertheless, over the years, inspections have uncovered regulatory offenses. Minor ones in the case of this slaughter facility, but in some other small abattoirs the breeches were major. In November 2020, under cover videos by animal rights activists led to the closure of a small facility in Baden Württemberg. In 2019, the Albert Schweizer Foundation published a report that examined the slaughter of 678 animals at small abattoirs in the state of Hesse between 2014 and 2017 and found one or more minor and/or major breeches of regulation in 44% of cases. Most had to do with ill or untrained staff working under time pressure.s

On its own, the provision of funding for new facilities or the modernisation of old ones is insufficient, concludes the Unabhängige Bauernstimme, (September 2020, p. 3). There also needs to be the political will to create a level playing field that does not financially disadvantage small slaughter facilities. As long as the costs in fees for such abattoirs is so much higher than for industrial scale meat processors, small outfits will have to make savings elsewhere if they want to stay in business. And in addition to funding and the reform of the fee structure, Unabhängige Bauernstimme (November 2020, p. 16) suggests a third political measure that should be taken: public procurement. If counties and municipalities decide to source locally produced meat for canteens, hospitals, schools and prisons at a decent price, it would be a major step towards a regional, sustainable food system with good animal welfare standards.

Butchery is a craft

Farmers in a small Bavarian town have come up with a different way to make the food system more sustainable. Traditionally, most rural communities had a ‘village inn’ that was closely associated with or operated by the local butcher. Such butchers slaughtered the animals they sourced from farms nearby. Since the 1980s, most butchers have become mere meat and sausage vendors who buy in what they sell. And because the choice at the supermarket doesn’t differ from that of most butchers, many have gone out of business.

With the closure of local butchers, farmers lost an important local market for their animals. In 1998, farmers in a small town near Lake Constance got together and took over the disused premises of a butcher with a slaughter facility. The whole project took several years to set up and there were major setbacks, but today, a master butcher together with a team of trained staff and apprentices slaughters and processes 15 pigs and one or two cattle every week. Meat, cold cuts, hams and sausages can be bought in the shop next door. Hot food is available for take away and the team of (by now) 30 employees supplies meat products to local shops and some restaurants. 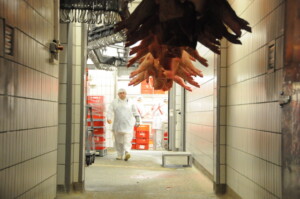 Interest in such combined slaughter, butcher and sales facilities is growing. It takes three years to become a butcher and an additional 320 hours of learning and practical training to take the exam for master butcher. Employing a team headed by a master butcher isn’t cheap, but it is pretty much a guarantee for good working conditions, perfect hygiene and excellent animal welfare. ‘A master butcher knows how important it is to reduce the stress for an animal as much as possible before slaughter because he processes the meat straight away,’ the consumer magazine ‘Schrot und Korn’ quotes Reinhard Gromotka who runs an organic slaughter and butcher enterprise near Munich with five master butchers and a maximum capacity of processing 50 pigs and 10 cattle a week. It would be much cheaper to have a contractor slaughter the animals and the master butchers just process them, but Gromotka doesn’t want to do that. If the job is killing animals all day for processing on an assembly line ‘it brutalises you’.

It seems that we truly get what we pay for: cheap meat will come from animals raised in confinement, slaughtered in huge processing plants by badly paid and often unskilled labour. Meat from animals that had a good life, suffered little or no stress on the short journey to an abattoir or artisan butcher, where master butchers and well-trained staff are in charge of slaughter and processing, will cost a lot more.

Marianne Landzettel Marianne Landzettel is a journalist writing about food, farming and agricultural policies in the UK, the EU and the US. She is the author of: ”Regenerative Agriculture – Farming with Benefits. Profitable Farms. Healthy Food. Greener Planet”. Before working for the BBC World Service, she was the UK correspondent for German Public Radio. She lives in London.