When Tiana Begum and her two teenagers moved into their new home in a 1970’s council flat in West London, the landlord didn’t just hand over the keys but also the pamphlet for their local veg-box scheme, which delivers fresh produce grown in the rooftop greenhouse above their heads. ‘That’s not food miles,’ Tiana exclaimed, ‘that’s food metres!’

They get a discount when they volunteer a few hours a week with growing and distributing the food. Tiana also soon discovered their energy bills are 40% cheaper due to the insulating effect of the greenhouse. These benefits come with some rules – you must separate your food waste from the rest of your household waste. This is collected weekly and converted to compost for the greenhouse via local anaerobic digesters. You also have to share the elevators with the farmers, so lifts littered with leaves or a roll cage full of produce are a regular occurrence. When there’s a glut, Tiana helps convert the surplus crops into chutneys and preserves, which she sells online, in the in-house community kitchen. Her children are also getting involved. Her daughter, Thameda, who’s finishing school soon, has been offered a paid apprenticeship as a horticultural trainee at the greenhouse. Her 14-year-old son, Amit, who never used to be keen on eating his greens has changed his tune since helping out with the growing and harvesting. ‘These vegetables actually taste of something. Vegetables used to be so bland but the ones they grow upstairs have so much flavour.’

Admittedly, this is a fictitious family and this greenhouse, so far, only exists in Oscar Rodriguez’s imagination. Oscar is an architect who heads up a design consultancy called Architecture & Food (A&F). He’s on a mission to convert London’s cityscape into an urban rooftop farmland. He’s been researching and developing building-integrated agriculture projects for his home city since 2007. Based on his extensive surveys of London’s rooftops, he’s identified 1,649.4 hectares of roof space with the potential to be converted to growing space. Considering much of London’s housing stock is Victorian and Georgian, he’s developed a portfolio of designs for flat and pitched roofs to suit residential, institutional, infrastructural and commercial properties.

Oscar explains the win-win nature of his designs, ‘Building integrated agriculture offers the opportunity to close thermal, nutrient and water cycles by introducing dense planting that converts the waste products of these systems into food. There will always be inputs but a functional model will be closer to the ideal closed loop system than the current linear model,’ where there is still much waste. As a result, this system requires a fraction of the energy and water of conventional open-air farming and Oscar’s designs make the most of every available photon, raindrop, scrap of organic waste and boiler exhaust. Throw hydroponics into the mix and they have the potential to produce 5 to 10 times more food over soil-based production. ‘The roof of the host building will likely have to be reinforced to take the new loading, but it will offer an immediate benefit in transferring its maintenance liability to the horticultural operation profiting from its use.’ Oscar elaborates, ‘The transfer structure will help control the greenhouse temperature by managing the thermal losses from below. It will also divert carbon exhausts into the greenhouse environment, boosting productivity when the sun is shining.’

But can this realistically provide a significant volume of food for such a populated metropolis? Oscar says, ‘London has 20,000 hectares of roofscape. Most of it is pitched and residential. If we were to convert half of that to commercial grade horticultural greenhouses with a very conservative productivity of 40kg/sqm/annum we could supply all of London’s 8.2m people with 1.3kg of fruit and vegetables per person per day. The average UK consumption of fruit and vegetables is 346g.’

That’s assuming all the hypothetical roof space was managed efficiently. Often once a building is designed, the architect’s intentions are not necessarily fulfilled by the inhabitants. Oscar’s solution is A&F’s sister organisation, Hyperlocal, which would manage the horticultural operation once the infrastructure is in place. 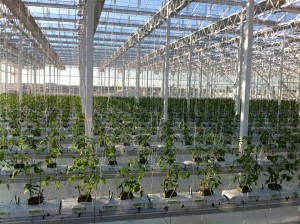 ‘Ideally we want residents running the farms but we can’t just throw them in there, they need training. We want to embed horticulture into the community to foster a shared ownership.’ Essentially, Oscar’s vision is a community-led local food system that improves our resilience to climate change, peak oil and rising food prices by growing food as close to the market and using a system emancipated from fossil fuels that harnesses a building’s waste outputs. Whilst Oscar is aware that this isn’t the answer to all our food needs, building integrated agriculture offers a smart way to maximize urban growing potential.

This can start to sound like a utopian pipe dream until you look across the pond. In 2011, Lufa built the first commercial scale retrofit greenhouse on a rooftop in Montreal. At 31,000 square foot, it produces 100 tons of vegetables per year which they sell directly to the locals through their veg-box scheme – they have 1500 weekly customers buying a combination of their rooftop produce and that of other local producers. They practice sustainable hydroponics, with no artificial pesticides, herbicides or fungicides. The greenhouse uses half the energy than a ground level equivalent. A closed loop irrigation system means they reuse 100% of the nutrient rich water, reducing their nutrient use by approximately 90% and their water consumption by 50-90%. In 2013, Lufa built a second greenhouse which is 45,000sqft where they expect to produce twice as much.

Commercial rooftop farms have been popping up in New York City as well – Gotham Greens have three rooftop greenhouses that also use hydroponics to produce maximum yields, which they sell to retailers. In partnership with Wholefoods they’ve built a 20,000 sq/ft greenhouse on top of a new-build Wholefoods store in Brooklyn that supplies fresh vegetables in the store below. Their newest greenhouse, a whopping 60,000 sq/ft is due to start production soon.

Sky Vegetables, another US-based company, has integrated an 8000sq/ft rooftop greenhouse into a new-build affordable housing complex in the Bronx, also using a sustainable hydroponic system. Situated in a food desert, their emphasis is on community involvement, providing locals with a much-needed source of fresh healthy food. The insulating effect of the greenhouse also saves the residents money on their heating bills. 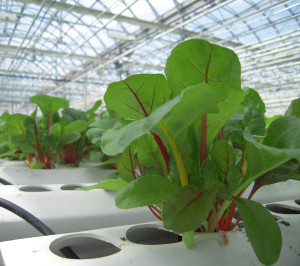 Suddenly Oscar’s utopia seems more of a reality. Although this type of urban growing offers pesticide-free produce, none of them can claim to be completely environmentally sustainable yet as they don’t have completely closed loop systems. Lufa admits that some of the nutrients needed, potassium and iron, are mined. Biodigesters present a possible solution by extracting the potassium from human effluent and converting it into compost, gas and digestate (a liquid fertiliser). But the technology is not there yet, and no one has developed a biodigester that is small enough for a rooftop, and able to convert human waste sufficiently. And the presence of pharmaceuticals in human waste prohibits its use in farming. Technology is yet to create a better system than nature has developed over billions of years. Organic growers would argue that the only way to secure a sustainable source of food for future generations is by investing in soil, which not only stores fertility but sequesters carbon.

So aside from a few technical hitches, what’s stopping us from going all out in a ‘dig for victory’ style rooftop agricultural revolution? Lack of political will means securing the investment and planning permission needed for such ambitious infrastructure is difficult. Those enterprising Americans have been quicker to recognise the merit of rooftop growing. In 2009, New York City introduced tax credits for anyone installing a green roof. They see the benefit as two-fold – green roofs improve the urban environment, increasing the value of a property and in turn bringing more investment to an area.

Yet over in London, Oscar is still in the advocacy stage and has yet to find the right investor/partner who is visionary enough to take the risk. These projects have high initial costs and whilst they are attracting interest from innovation funding, pre-feasibility match funding from investors is proving harder to leverage. There’s very little cohesive data on rooftop agriculture and it’s yet to be proved as a viable business model. 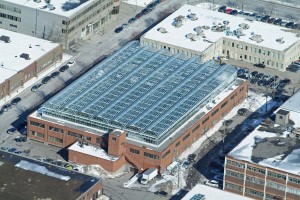 While agricultural subsidies continue to go to large industrial farms and the British government, for the most part, abdicates responsibility for the nation’s food system, urban agriculture remains in the margins. When Oscar pitched to one of the big five supermarkets, they were interested in the opportunity to host a greenhouse on one of their flat roofed superstores, but their ultimate response was ‘not yet.’ Perhaps they are waiting until food security rises up the global agenda and the focus shifts from maximising profits to basic survival? At A&F, they’re aware of the many barriers to implementation and appreciate that rooftop farming is only one part of the puzzle of how to feed the world sustainably, but they’re dedicated to making it work.

Oscar’s vision pre-empts a future where peak oil, unstable climate, exponential human population growth and rising sea levels will continue to impact agricultural productivity, and cause geopolitical unrest and volatile food prices. In this scenario, rooftop agriculture will perhaps become a necessity rather than a nicety, and we need the infrastructure in place sooner rather than later.