Home > News + views > The Story of Umgibe: A farm in a plastic bag

The Story of Umgibe: A farm in a plastic bag

Umgibe’s business model is tied to its educational platform, which brings together the societal need for hunger and economic relief with a sustainable business model based on small-scale organic food production and distribution. Having encountered hunger in her own life, Nonhlanhla’s main objective for Umgibe is to stop widespread hunger and malnutrition among people living in poor urban and rural communities.

Nonhlanhla’s name means ‘mother of fortune’ in Zulu. In Nonhlanhla’s case, she turned the misfortune of a cancer diagnosis in 2014 into an opportunity for growth. A single mother, unable to work and aware of the necessity of good nutrition, she was determined to grow her own vegetables. In an interview for the Southern Africa Food Lab, Nonhlanhla explains how she ‘dug up the soil in her back yard and planted her first crop, only to have the seedlings devoured by chickens.’ Heartbroken, she tried again by balancing pot plants on the rungs of a ladder, but this method was short lived due to a child accidently sending the plants cascading down the ladder. Next, she built a wooden frame from which she hung recycled plastic bags filled with soil and this worked a charm. She planted her seeds in these bags and tended to them, noting how little water was required and how well the plants did. Nonhlanhla’s perseverance led to the birth of Umgibe.

In South Africa, plastic bags are often referred to as urban flowers. Without any co-ordinated recycling operations, streets, fences and open fields are ‘decorated’ with empty plastic bags flung to the wind. With her passion for re-using what is available in any given environmental niche, Umgibe initially relied on re-purposing plastic bags. In 2019, Joye began a new initiative using biodegradable material for planting. Umgibe no longer uses plastic bags, but rather PET bottles (2 litre soda bottles for instance) that have been upcycled and combined with another material that enables the production of biodegradable bags. Joye explained to me that this process is expensive, but better for the environment and acts as a motor for removing plastic bottles that litter her community.

The word ‘umgibe’ in Zulu refers to a type of washing line. It was upon an umgibe that Nonhlanhla’s family hung their clothes and sleeping mats when she was a child, so as to protect them from termites in daylight hours. Nonhlanhla chose this word to represent her easily reproducible method of producing organic vegetables that is amenable to both dense urban living and rural contexts. Like the washing line of her childhood, her method of planting a diverse range of vegetable crops in small plastic bags and hanging them from wooden frames, suspends the plants above the low land where they would otherwise be vulnerable to pests, chickens and drought. With her ‘farm in a bag’ her vegetables thrived with limited water, bringing huge relief to her family in a time of crisis. 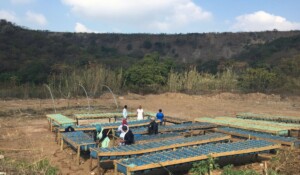 About her method Nonhlanhla said, ‘I had little idea that this new system would be climate smart, suitable all year round, water efficient, space efficient, disease resistant and far less labour intensive than anything else I’d seen done.’  This climate smart growing system has brought her accolades from academics working in environmental humanities and has also won her a wide range of awards.

Empowering women farmers in South Africa with the means to produce healthy livelihoods is a major socio-economic contribution to development on the African continent and one of the many reasons for Umgibe’s national and international acclaim. With such an exceptional legacy, I was quite surprised to find that Nonhlanhla answered the telephone when I rang early one morning in February of this year, thinking I would reach her assistant. I apologised for perhaps waking her and Nonhlanhla laughed, ‘I have been up for hours setting up for a training on the farm.’ This is not a CEO distanced from her organisation but one deeply embedded in the process of growing and training in local communities.

Nonhlanhla is committed to the concept of the circular economy in which all bi-products of consumption are recycled in the agricultural growth cycle. In urban contexts, where there is limited rubbish removal, the immediate environment is filled with waste which she finds ways to recycle as part of her farm planning. This material innovation is a solution to social, economic and environmental degradation.

In addition to contributing to organic food production for families, Umgibe promotes well-managed, profitable and equitable cooperatives and small-scale farmers. Women learn the arts of vertical farming in dense urban townships and farming in a bag where more horizontal land is available. Maximising limited space using these innovative technologies that do not rely on arable land has proven to reduce systemic hunger and promote sustainable small-scale farmers. Having more recently acquired land outside of Durban’s urban setting, Nonhlanhla enjoys leading sensorial workshops for rural farmers where drought or flood conditions often militate against subsistence farming. The vegetables are bought from these local farmers who have been trained and contracted to grow for Umgibe.

Extending her immediate success in farming, Nonhlanhla began to share her knowledge with a wider population in Kwa Zulu Natal and network with environmental activists, organic food associations and international farmers dedicated to green economies. She explains, ‘I know hunger…I know what it is to not know where my next meal will come from. I don’t want children going to school hungry. The stomach doesn’t discriminate and it is hunger which leads to drop outs, the blesser syndrome, HIV, crime and so on.’ The ‘blesser syndrome’ is a phenomenon that has been prominent in South Africa since 2016; it refers to a form of transactional sex in which older rich men (‘blessers’) entice young women (‘blessees’) with money and expensive gifts in exchange for sexual favours. Being financially independent as a woman in South Africa is a key indicator in reducing gender-based violence, mental health illness, and childhood hunger and malnutrition.

In the context of South Africa’s brutal colonial history of violent land occupation and theft, the reclamation of land by black women and the ecological and political significance of sustainable agriculture, signals a major victory in agricultural relations of production. Ingenuity, grit and necessity led Nonhlanhla to grow healthy food for herself and her family. Her love of community development led further to the creation of an experiential training centre that currently supports more than 600 smallholder farmers, the vast majority of whom are women working to support their families.

Food security and nutrition remain at the heart of the Umgibe model. ‘We encourage our farmers to apply an 80/20 principle,’ Nonhlanhla explains. ‘It’s no good if you’re selling your produce to make money only to buy rubbish to eat from others. People must have access to nutritious food and we encourage them to plan on consuming around 20% of what they produce, or, in the case of larger producers, sharing or selling this 20% locally.”

Umgibe is now in the process of implementing their growing system in a number of the poorest schools in Kwa Zulu Natal, with the aim of teaching children how to grow their own food. This intervention, while one of the most important, is also under tremendous strain given the closure of schools across the country due to COVID-19. One of the major consequences of school closures has been the deepening of hunger among children who were almost entirely reliant on school meals for their subsistence. With the extra burden of joblessness and hunger in the wake of school closures, Umgibe’s function has accelerated the need for women to have the means of producing enough healthy food for daily survival. It is in this sense that the microbiome of the gut and the macrobiome of societies based on race, class and gender inequality require the kind of horizonal work that Umgibe offers.

For the great majority of women farm workers in South Africa, life presents itself as a bitter harvest, with exploited workers often not able to afford the very food they labour to grow. Examples of women who own land and have the resources to develop their land into productive small-scale organic farms are difficult to come by and in this sense, Umgibe is more than a development project. It is a revolutionary project rooted in a dark history that underpins black poverty and the feminisation of poverty where poor women are often dependent on men. With some of the highest rates of diabetes in the world due to poor nutrition and a limited diet of maize, this celebrated ecological interruption of Umgibe is also part of a global awareness of links between toxic agricultural practices and the essential need for social and environmental justice in South Africa’s agricultural sector.