Home > News + views > The vital role of hedgerows: ‘A well-managed hedge is a web of life’

The vital role of hedgerows: ‘A well-managed hedge is a web of life’

Otherwise known as a hedgethorn, hedgetree, spinney or haga in Old English, the hedgerow, as we know it today, has been around for millennia, initially as boundaries after clearing woodlands (that would often house livestock) or planted between ancient estates and kingdoms, to the more recent acts and awards pertaining to parliamentary enclosures. Now, the role of the hedgerow is one of environmental concern, and as we hear from the following experts, by implementing agroecological management systems to improve the health of our hedges, we will see numerous benefits to our natural environment.

A trained eye will know whether the hedge in question is a single variety, mix of varieties, what wildlife it shelters, associated fungi, the purpose and history of the hedge, whether it was planted as a medieval enclosure, a guide for Welsh drovers, part of the 18th Century Enclosures or simply planted as a shelterbelt or in pasture.

Each and every hedge has a story.

But sadly, it’s not all flourishing field maples or blossoming buckthorn. In the 2007 Countryside Survey, it noted that only 48% of hedgerows were in ‘favourable condition’, but in arable areas this was only 12%. This lowly figure is largely down to a drive for productivity and zest for tidiness. The RSPB highlights an Institute of Terrestrial Ecology (ITE) report, which tells us, ‘Between 1984 and 1990 hedgerow length in England had declined by 20% and in Wales by 25%. While outright removal of hedgerows accounted for 9,500 kilometres per year, almost half of the loss was a result of lack of management.’

Nigel Adams, a country management consultant who teaches communities, corporations, land managers and farmers to lay and manage hedges worldwide, says, ‘It doesn’t matter where you are in the world, a healthy hedge, which is managed accordingly, will bring an incredible number of benefits to the environment.’ Nigel is part of Hedgelink, a partnership that brings people together to conserve and develop our hedgerows. They have provided guidelines to help farmers and land managers create a ‘healthy hedge’. These guidelines fall into two simple methods of management: sympathetic trimming and rejuvenation.

In relation to sympathetic trimming, it’s important to cut at the right time and not to cut too often or too tight. Hedges should be cut towards late winter to allow winterberries and other fruits to grow to provide food for wildlife during winter. The Farming and Wildlife Advisory Group (FWAG) suggests farmers cut their hedges every other year in order to encourage biodiversity and save on unnecessary use of time and money. It is illegal to cut during the bird-breeding season which runs from the first of March through to August. 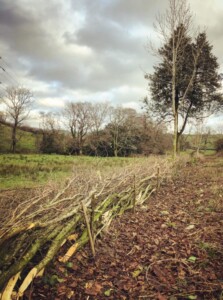 Following these various cutting systems will enable the hedge to become thick and dense, which will not only provide ample food, but also offer a safe nesting site for small birds and create habitat for wildlife to roam.

Nigel has said that, ‘One of the biggest problems we’ve had with [hedge] management is over-trimming with a tractor flail mower, which not only stops berries and flowers blossoming, but it can also cause a huge deterioration in structure, and even threaten the survival of the hedge itself.’ As a solution, Nigel has created a cutting system he calls, ‘incremental trimming’. This careful trimming technique with the flail, cuts the hedge a little higher than the last time it was cut (an extra couple of inches higher to be specific), to allow the hedge to have enough breathing space to grow buds, flowers and then fruits that provide food for birds like the yellowhammer and linnet, and the migrators, like field fare and redwing.

Nigel says, ‘I am not against the flail whatsoever, but we will slowly and imperceptibly lose so many hedges if landowners repeatedly use the flail at the same height, year in, year out. We need to allow the hedge to develop bit by bit, year-on-year. If everyone does this more sympathetic trimming, we will have different heights of hedge that will help encourage a greater diversity of wildlife.’

Creating a more diverse body of plants around the hedges, which will increase biodiversity and soil health, is also valuable. Nigel tells me, ‘The diversity of species in a hedge is its greatest strength. The more variety of plant species we can introduce, the greater the chance for that hedge to provide food throughout the year, and thus, a habitat for insects and other animals to thrive.’ Hedgelink suggests planting ‘Willows and blackthorn for early season nectar; hawthorn, bramble and rose for summer flowers and autumn berries; ivy for autumn nectar and late winterberries.’

Not only should we be diversifying around the hedge, we also need to be diversifying the hedges themselves. Planting a richer diversity of shrub species in our hedgerows can help. Nigel notes that ‘There are two types of hedgerow in the UK: a species-rich hedge and a pure hawthorn hedge. We need to remember that the hedgerow is simply mimicking a linear woodland edge, and so, the more diversity of shrubs you have in it, the more complex and resilient it will be, the more wildlife you’ll have passing through it, and the greater the chance it will have to thrive as a semi-natural habitat.’

The pure hawthorn hedge mainly resides in arable previously open field systems and it just has one stage of blossom. In the species-rich hedgerows that are often seen in ancient countryside, there is blossoming throughout the year and a robust diversity of food available. Nigel suggests that young trees which have established themselves must be allowed to grow up into a mature tree, as this will inevitably increase the amount of wildlife in the hedgerow. He explains, ‘One mature hawthorn will produce the same amount of berries as 300 metres of trimmed hawthorn hedge.’ Quite incredible!

Furthermore, hedges must be planted to ‘link with other wildlife habitats and fill in gaps’, essentially creating wildlife corridors. By connecting hedges to woodlands, hedges to copses or any other habitat for that matter, wildlife can move more freely and safely. The more we can establish healthy hedges, connecting habitats like wildflower margins, the more likely biodiversity will increase. According to Jo Staley, who also spoke at the ORFC 2021, ‘A recent report suggested that if we lost a lot of our hedges here in England, 82 conservation priority species would face population decline as a result.’

Rejuvenating hedges every few decades by hedgelaying or coppicing is also important. The hedge then starts a renewed cycle of healthy growth, improving its resilience. This is something Nigel feels isn’t done enough. 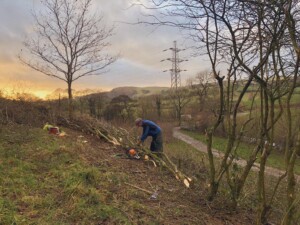 This rejuvenation is done across the British Isles by hundreds of passionate and full-hardy hedgelayers. I spoke to James Robinson, a farmer and hedgelayer from Kendal in Cumbria, who talks about the importance of hedgelaying at his farm. ‘Here at Strickley [Farm], we have around 10 kilometres of hedgerow and 6 kilometres of dry stonewalls, most of which can be dated back to a few hundred years ago. That works out as 11 acres of hedge canopy on our farm, that’s 3% of the land. We lay down our hedges on a cycle of 25 years. We have all different ages of hedges, from 1 metre to 7 metres tall. This diversity of hedge height attracts an enormous amount of wildlife and helps in creating resilience in the soil structure. Once you establish a hedge properly, you can then allow it to grow unconstrained by fences or the like, which then encourages wild plants like dog rose and bramble to grow, creating a brilliant canopy for wildlife to forage or nest in.’

James also tells me that well-managed hedges provide jobs throughout the year, sustaining cultural heritage and skills such as laying and coppicing, which have often been passed down from generation to generation. ‘It just takes two generations of not doing it to be lost,’ James comments. He notes that hedgelaying has many different regional styles to it, some even different from one farm to the next. James uses a Lancashire and Westmorland style for his hedgelaying, planting a rich variety of species, such as hawthorn, hazel, blackthorn, elder, oak, ash, crab apple, holly and willow. What’s more, is that when the hedges are flourishing, James tells me that the cattle can graze on them at different times of year: ‘They mainly graze come early spring when new buds are around and towards late summer as well.’

In December 2020, the Climate Change Committee published the ‘Sixth Carbon Budget’, which noted hedges as one of their ‘key measures’ to further reduce emissions, stating that they will be ‘increasing on-farm diversification with the integration of trees on 10% of farmland and extending the length of hedgerows by 40% by 2050.’ The NFU, in their new report ‘Achieving Net Zero’, calls to promote ‘bigger hedgerows’ to capture more carbon.

Since 1997, hedges have been protected by The Hedgerow Regulations, and for the majority of the UK, are protected as a ‘Priority Habitat’, which stops them from being removed in most cases.

Hedgerow management is expensive, so it can only be positive to hear that DEFRA have announced new details of the Environmental Land Management scheme (ELMs), under which ‘farmers will be paid for work that enhances the environment, such as tree or hedge planting’, so here’s to hoping for more, well-managed healthy hedges.

You can find Nigel Adams website here and Hedgelink here.

Angus D. Birditt Angus is a writer, photographer and award-winning food producer. Inspired by artisan and regional food & drink, nature, landscape, and the rich rural heritage of the British Isles, Angus set up Our Isles as a way to celebrate and conserve it for future generations. He has recently published his collection of poetry on rural life with Pavilion Books.