Home > News + views > ‘To say goodbye is to die a little’: Palestinian farmers struggle for survival

‘To say goodbye is to die a little’: Palestinian farmers struggle for survival

At the Sustainable Food Trust we share a range of voices from around the globe. This week, Vivien Sansour offers her thoughts and experiences about what is taking place in the West Bank village of Battir and the Makhrour Valley. Vivien is an artist, storyteller, researcher and conservationist, with her work being showcased around the world. She founded the Palestine Heirloom Seed Library as part of her effort to advocate for seed conservation and agrobiodiversity.

I hardly knew my brother-in-law’s father, Anton. But right before he passed away, he looked at me and said, ‘To say goodbye, is to die a little’. This was more than fifteen years ago, but his words never left me. I think about it every day as I maneuver in an absurd reality of life and death. To be Palestinian is to learn how to say goodbye over and over again – not just to people, but to places, trees, valleys and childhood foods. 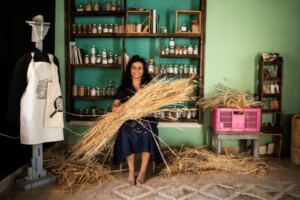 I am no stranger to this as a woman and a Palestinian, who has spent my whole life bidding farewells and trying to make sense of it all. This is precisely the reason, a few years ago, I became obsessed with seeds. Heirloom seeds gave me the opportunity to salvage some old stories, things we were saying goodbye to, and to give them new contemporary twists, subsequently reviving them for the sake of the future. I was trying to avoid another goodbye, and to hopefully offer a new generation at least fragments of their food heritage so they can know where they come from and what they come from.

This is why I started the Palestine Heirloom Seed Library and why, with our team, we invested a lot of time, attention and resources in developing an agroecological site in the heart of the mountain village of Battir – a few kilometers south of Jerusalem and west of Bethlehem and a UNESCO world heritage site. Battir is a major agricultural landscape comprised of ancient stone terraces and a traditional irrigation system dating back thousands of years. For two years now, we have worked hard to reclaim the land and restore the soil. The terrain required significant rehabilitation, including terracing – itself an art which is disappearing.

‘We work with stones because that is what we have. We don’t need to bring any outside inputs,’ says my colleague Hassan and I am in absolute agreement. We use what we have. Inspired by our ancestors who tended the land before us, we know that whatever we do has to be founded on indigenous wisdom. We may make adjustments and imagine new solutions, but we never dishonour those who have taught us how to love these very mountains that have sustained us for millennia.

But all these things that we are working hard to conserve are under threat. Not only from climate change but from the increase in Israeli settlements, illegal under international law and with a presence that is both militant and damaging to the natural terrain. Construction of settlements, along with plans for roads and business parks, carve up ancient landscapes, pollute and damage water sources and harm biodiversity. For us, this is not a story we read in the paper – it is our daily life and thus our daily conversation: how do we persevere in our attempt to salvage the bioculture of this place, while at the same time managing military and settlement expansion?

In the global conversation about conservation and sustainability, we often find ourselves lonely if not misunderstood. How can the world that claims to care about sustainability, be so dismissive of social and political justice? How can we speak of the lost watermelon or the disappearing tomato without having a real conversation about the people who cultivated these varieties and the lands that were once their farms and their homes? And how can we understand food without understanding its people and the systems in which each food practice or variety was created? In Palestine, when we speak of food sovereignty, we are speaking not only about the quality of food or its value, we are speaking about survival. We are speaking of an agri-resistance movement that is defying all odds.

It was early morning and we had just arrived at our site to harvest our green garbanzo beans. The sound of a truck interrupted the morning silence, it was an illegal settler who had taken over a plot of land on the other side of the mountain. He was there with his sheep and his machine gun, asserting his presence and claiming ownership.

Last year this settler had taken over the land of a Palestinian family who had recently had their restaurant on the site demolished by the Israeli army. The quaint restaurant and farm had sat atop one of the terraces in the Makhrour Valley that connects Battir to Beit Jala and Bethlehem as a whole and has been the centre of our agri-cultural life for generations. My great grandmother, Jameela, along with my grandfather grew heirloom tomatoes, grapes, figs and apricots on this very mountain. Their methods unintrusive, they cultivated Baal varieties – rainfed crops that required no irrigation. They lived in complete harmony with the mountain, not as its master but as its partner.

They were supported by years of managing the soil without any chemical inputs or plastics. Generations of respectful cultivation processes have left the terraces of Al-Makhrour Valley abundant and beautiful. However, this changed drastically last year when the settler arrived. In place of the restaurant, an ugly black plastic barracks for the animals was erected, creating a damaging impact on the terrain as a whole and on the natural environment in particular. An Israeli flag now flies on the hill above us, leaving the Palestinian community feeling intimidated and afraid to roam freely on the land.

I write about the Makhrour Valley not as an abstract place that I researched. This is the place where I grew up and where I spent much of my life learning through touch, smell and endless walks, about the flora and fauna of Palestine. Today, I am hesitant to walk in the valley alone and, worse, I am always worried about the day the whole valley will become inaccessible to us and to tens of other farmers. What will we do when we will no longer have access to our water source? How will we manage when we can’t build a small shed to keep our tools? These are realities in many villages in the West Bank, but for a moment we thought that having UNESCO world heritage status would protect us from suffering the same fate. However, recent developments are proving us wrong. Israel’s continued land annexation under the disguise of ‘conservation’ aims to turn our valley into what they call ‘state lands’ where Palestinian presence is prohibited and where we are severed from our food source, be it our farms or our foraging spaces.

To live a little

‘I have bad news,’ Hassan’s voice mutters as I pick up the phone during a break from writing this very piece. ‘A new settler has come and he has put up a new outpost. He is not going anywhere.’ Outposts set up by Israeli settler youth is a common phenomenon in the West Bank. Encouraged by nationalistic and religious dogma, these armed young men find spots on the tops of mountains and set up shop, demanding that the state supply them with electricity and water. These ‘facts on the ground’ – a policy of taking land and very quickly erecting physical structures – usually leads to the establishment of a new settlement. Once this exists it is rare for it to be demolished, despite being illegal under international law, and results in the further suffocation of our lives.

Indeed, we already live in cages separated by Israeli-only roads and settlement by-passes. Our own ancestral lands, essentially our food source, have become highways for settlers commuting from one settlement to the next while tunnels are built for us underneath these structures, to make us invisible. There is very little left of Palestine and yet we must keep striving to maintain our communities.

Perhaps we won’t be able to save the Makhrour Valley, but we should at least try, and we cannot do this alone. As I type these words, we are putting new seeds in the ground and though we do not know if we will get to harvest this crop next year or not, at least we know that seeds have their way of surviving. And much like these seeds, though saying goodbye to many of our lands and valleys has led us to die a little, we are still alive and beneath each rock, and each centimetre of soil, our ancestors have left their biological evidence that speaks of our rich agri-biodiverse heritage, our resilience and our commitment to life.