Home > News + views > Behind the smoke: The story of female fish smokers in Ghana

Behind the smoke: The story of female fish smokers in Ghana

Fishing is one of the most important sectors in many parts of the world, supporting the livelihoods and nutritional requirements of millions. This is as true in Ghana, where the industry provides jobs for 500,000 people, and where fish accounts for more than half of all animal protein intake. Of this, as much as 70% is consumed in the form of smoked fish. Not only does the smoking process reduce post-harvest losses by extending the shelf-life of the fish, but it’s also an activity which has been central to coastal communities for hundreds of years, and the smoked fish itself is therefore highly valued for its complex flavours and cultural significance.

The Ghanaian smoked fish industry has worked in much the same way for generations. Local fishermen bring their catch to the beach – catfish, herring, mackerel, or whatever is caught that day – and go about selling it to women (often their wives or family members) on the shore. The fish is gutted and taken back to the home, ready to be smoked in the traditional way.

This is a familiar tale in many countries, as cultural norms dictate that women should not participate in fishing itself, especially in marine waters. Across Africa, women represent approximately 15% of the total fishing workforce yet account for 60% of processing roles. These roles are often low-wage and involve labour intensive, repetitive tasks which frequently have negative implications for health and wellbeing.

The hidden costs of fish smoking 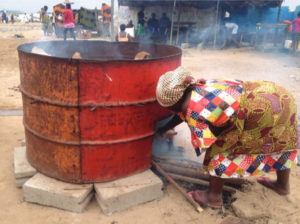 Traditional West African smoking ovens consist of metal drums or mud stoves loaded with firewood to produce smoke, over which the fish are placed on a metal grill. These ovens are notoriously hazardous. Many women suffer from burns and backache while operating the stoves, as well as respiratory conditions, eye irritation and headaches, as a consequence of exposure to the smoke. In some cases, burns to the fingers are so severe that women are unable to obtain official documents which require fingerprint identification.

In 2008, the FAO led the development of a new type of oven, the FAO-Thiaroye. It’s a great deal safer and uses less firewood making it a more sustainable and efficient option. It was also specifically designed to improve the quality and safety of the smoked fish, which often contain extremely high levels of carcinogens called polycyclic aromatic hydrocarbons (PAHs). Reducing PAH content is important, for example, the European Commission requires no more than 12 micrograms per kilogram in smoked fish which is imported to Europe. Fish smokers who are able to meet this standard can receive around 100 Ghanaian cedis per kilogram, roughly ten times more than the price fetched in local markets.

In theory, the FAO-Thiaroye can therefore help women to receive a higher price for their fish, while reducing the health costs associated with the smoking. But how far can such technology go in promoting gender equality in this industry? Modern ovens, cold storage and packing facilities still remain out of reach for the vast majority of small-scale, female fish smokers. In contrast, a small number of industrial-scale smoking units in Ghana are able to cater exclusively for the export market. They produce around 20 tonnes of smoked fish annually, which reaches African communities in countries such as Belgium, the Netherlands and the UK. These larger processing plants are, unsurprisingly, owned and managed by men, with women for the most part only represented in low-paid processing roles.

There are many reasons why, relative to men, women may struggle to accumulate resources which help them benefit from an activity such as fish smoking. These factors which prevent access to resources or opportunities based on gender roles are sometimes termed ‘gender-based constraints’.

As mentioned above, one of the biggest challenges described by women in Ghana is in accessing finance to invest in smoking ovens and cold storage. It’s very difficult for most women to obtain loans from commercial banks in Ghana, for example, due to laws which prevent them from inheriting property or land which can be used as collateral. Without this, women may require guarantee from their husbands to apply for loans, something which is not always straightforward.

A commonly proposed solution to this problem is microfinance, the provision of small loans at low interest rates, usually by smaller banks or NGOs. In Ghana, microfinance has certainly had a positive effect on improving rural women’s ability to receive loans, but unfortunately it is not a silver bullet for a number of reasons. Often microloans are given to groups of women, rather than individuals, to avoid the need for guarantee from their husbands. Yet many describe tensions between group members when it comes to paying back the loans, sadly sometimes resulting in verbal abuse and enormous shame. Another concerning issue is that, according to one study, only 16% of women actually retained control over the spending of their loan.

This uncovers a fundamental problem in addressing gender equality, one which is often overlooked by promoters of microfinance and other schemes to improve women’s economic empowerment. Power to make decisions, whether financial or in other aspects of the household and business, so often lies overwhelmingly with male family members. Some women have admitted that their husbands do not trust them to hand over the money received through loans or selling their smoked fish, which has even resulted in accounts of domestic violence.

The deep-rooted socio-cultural norms which perpetuate this situation also contribute to other gender-based constraints. Women face a great deal of stigma when travelling alone, which prevents them from feeling confident enough to travel to (or indeed being allowed to) important training sessions in food hygiene, for example, or from reaching more lucrative markets in larger cities. Engaging in networks to secure contracts with supermarkets or to connect with service providers, is also a challenge, given that women are not expected to participate in formal business networks; they are encouraged instead to keep social networks to friends and family. Finally, it’s important to remember that in addition to their fish-smoking work, most women face a ‘triple-burden’ of household, childcare and community labour, placing major constraints on time and emotional resources. This is true across the fishing and agriculture sectors in developing countries, where women’s overall work burden is disproportionately greater, and mostly unpaid.

So, the development of new ovens such as the FAO-Thiaroye is greatly beneficial for female fish-smokers and goes a long way to address the health costs they face. But it does not provide all of the answers for solving the wider social issues preventing women from progressing in this industry, which is, of course, essential for sustainability.

A number of communal fish-smoking plants and co-operatives have been set up in Ghana, already helping to improve women’s access to better facilities, educational resources and business networks. The Ghanaian Fisheries Commission has also established a graded certification scheme which rewards small-scale smokers for improving their food safety standards, and that can help them to receive a higher price in local markets or supermarkets.

Crucially however, these solutions must be accompanied by action from the ‘top-down’, at a government level, to address the institutional biases which prevent women’s empowerment in Ghana, such as inheritance laws and a lack of representation in policymaking positions. At the same time, interventions from the ‘bottom-up’ are perhaps one of the most important ways to unpick the deeply entrenched ideas about gender roles and labour distribution within the household and community.