Home > News + views > The most sustainable bread in the world

The most sustainable bread in the world

Sales of bread-making equipment, for example, have been on the rise in the past decade. Patrick Thornberry, Managing Director of Bakery Bits, the largest supplier of bread-making equipment and ingredients for the home baker, is a testament to this. He set up the company in his spare bedroom nine years ago, and it now ships everything from specialist flours to fresh yeast to 48 countries around the world. “It’s not just the UK market that has seen an uprising in home baking, if you’ll pardon the pun,” he says:

I think this is a global trend that is set to continue as people turn away from mass-produced bread. A lot of my customers want to avoid the additives in commercially produced bread and bake a more wholesome loaf. But more than that, bakers want to use more ethical and sustainable ingredients too, which reflects in our sales. Our biggest selling flour is a British stoneground organic flour.

This trend towards healthy, wholesome bread can also be seen through the Real Bread campaign – now followed by almost 24,000 people on Twitter. The campaign challenges the manufacturing process of commercial bread, which uses a cocktail of additives including enzymes that strengthen the gluten in the flour and feed the yeast, and emulsifiers and preservatives that supposedly make a ‘better loaf’. Real bread, however, has just four ingredients: flour, water, salt and yeast.

In my experience as a teacher, the increasing interest in artisan and home-baked bread is clearly linked to concerns around both health and sustainability. My students want to bake a healthier bread: they want to use organic flour, avoid plastics in their baking and are concerned about the environmental impact of their actions and choices.

Most bakers would be surprised to learn that one of the key ingredients in mass-produced bread is a by-product of the petrochemical industry. 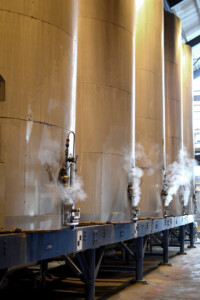 Even many organically produced breads use non-organic yeast. This is because most certified organic foods must comprise at least 95% (by weight or fluid volume, excluding water and salt) certified organic ingredients, but up to 5% of the food may contain non-organic ingredients. This means that bakeries, more often that not, use non-organic yeast. Five per cent may not seem like a lot, but the scale of yeast production is massive. Each loaf made with commercial yeast therefore contributes to the greenhouse gas emissions driving climate change. This raises a critical sustainability issue in bread production.

Earlier this year the World Health Organisation stated that glyphosate is “probably carcinogenic to humans”. Recent figures show that the use of glyphosate on our crops has increased by 400% in the past 20 years. Almost a third of British cereal crops were sprayed with glyphosate in 2013. As a baker, this is highly disturbing because glyphosate carries over into the flour we use to make bread. A study in 2013 by Pan UK found that 63% of loaves analysed contained traces of at least one pesticide, and this year, tests by the Defra committee on Pesticide Residues in Food (PRiF) reported that up to 30% of UK bread contains glyphosate.

A campaign is growing to ban glyphosate, and the Soil Association is heading up a petitionrequesting that supermarkets and other bread manufacturers stop using wheat sprayed with glyphosate in their products.

The solution is in our hands – make your loaf count 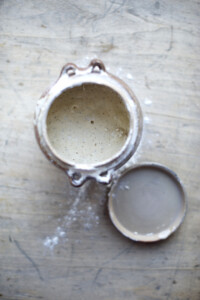 There are several things we can do when baking our own bread to ensure our loaves are more sustainable. We can use local, organic flour and organically certified yeast, or bake a sourdough bread using a natural sourdough leaven.

Sourdough bread made with local, organic flour is perhaps the most sustainable bread of all. It entirely avoids the chemical fertilisers used in producing commercial wheat and yeast, as well as the carbon used in transporting this wheat and yeast hundreds of miles from source to factory to retail outlets. An organic, sourdough loaf is the ultimate real bread and, what’s more, it tastes fantastic.

Vanessa Kimbell Vanessa is a 3rd generation baker of Italian descent, and qualified as a baker age 18 after spending her childhood helping out in a bakery in the South of France.