Regenerative farming in Palestine for social and ecological resilience

Mohammed recently spoke about how regenerative farming supports the resilience of farmers living and working under the Israeli occupation, enabling them to adapt to climate change and build up agricultural productivity despite difficulty in importing inputs. 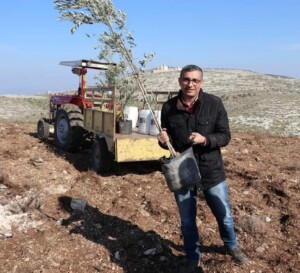 Using both traditional and innovative techniques to enrich the soil, the farmers saw an increased yield this year, at a time when they are experiencing the impact of changing rainfall patterns in the region. Reduced rainfall affects the immune system of the olive trees, making them more vulnerable to pests and diseases. Irrigation is not possible as Israel’s settlements and wall construction in the West Bank has made many traditional wells inaccessible to Palestinians; further, permits for new boreholes and infrastructure are rarely given by the Israeli government, which controls the water resources. Adaptation to these climatic changes has included practices designed to reduce water loss from the soil in the summer.

The PFTA runs training and skill-share events for farmers in its network, including how to make their own compost, set up an intercropping system and adopt a zero-tillage approach. The compost used is a mix of plant material and animal manure from local Bedouin farmers, who keep livestock in extensive systems where they roam by day and are brought in at night. The compost is organic, under EcoCert’s requirements as the certifying body for PFTA farmers. Clover is used as a cover crop, sown between the olive trees to reduce the surface area of the soil exposed to the hot summer sun and to fix nitrogen in the soil. Zero-tillage is being introduced, with an initial 20 farmers trialling the practice and demonstrating to other farmers in the network its effectiveness at reducing soil erosion, as well as water and nutrient loss in the soil.

Mohammed explained his enthusiasm for his work with the PFTA and its potential for social and environmental change: “In terms of climate change, we want to be a positive role model. We are the agricultural sector and this sector can play a major factor in reducing the impact of carbon. I have a plot on my family farm where I practice zero-tillage and other practices we research, and I keep bees there too. I show the farmers what works well for me, personally.”

Visiting practitioners are invited from overseas to train and share best practice in regenerative organic farming to the PFTA cooperatives, and Mohammed also conducts research. Not everything can be applied to the Palestinian situation, so the farmers adapt what they learn to their situation and share what works among the other cooperatives. The general approach of regenerative farming – to reduce the use of inputs – fits well with the specific needs of Palestinian farmers, as even certified organic inputs are not easy to find or import.

Some of the fresh produce can be marketed locally, and products like olive oil and almonds are also exported. The increases in productivity and yield that come with regenerative farming practices have the potential to support Palestinians in becoming less reliant on food imports. This is important, given that annual agricultural imports exceed exports significantly, with a total export value in 2017 of $94.8 million and import value of $935 million, resulting in a negative trade balance of $840 million – 55% of total imports in 2018 were from Israel.

Mohammed told us, “The farmers who are using regenerative farming practices have been finding that it also creates sustainable production, increasing productivity and income. The first thing for farmers here is to establish a good living from the land. Many of them also know that intensive farming isn’t the best when it comes to the health of the crops and the people who consume them – even those farmers who work their land intensively will favour an area where they grow organically, for home consumption.”

Closing the loop in Palestinian farming with regenerative practices, benefits more than just the ecosystem. The typical size of a family farm in PFTA’s network is around 4 hectares (though some go up to 15). Farms are traditionally worked by the whole family – so even if one family member owns a large area, other family members are brought in to tend and harvest the land. In this way, improvements to productivity and yield benefit many more people than just the landowner. This points to the close relationship of ecological and social regeneration in Palestine, where every family retains an ancestral tie to their lands and the crops that are traditionally grown. Supporting the health and resilience in Palestinian farming also supports the wellbeing of Palestine’s many rural communities, who are captive to a situation that in so many ways strangles economic capacity.

Join Mohammed in Bristol on 1st March to talk about regenerative farming in Palestine.

Cathi Pawson Cathi is a co-founder of Zaytoun, the social enterprise which pioneered sales of Palestinian produce in the UK.